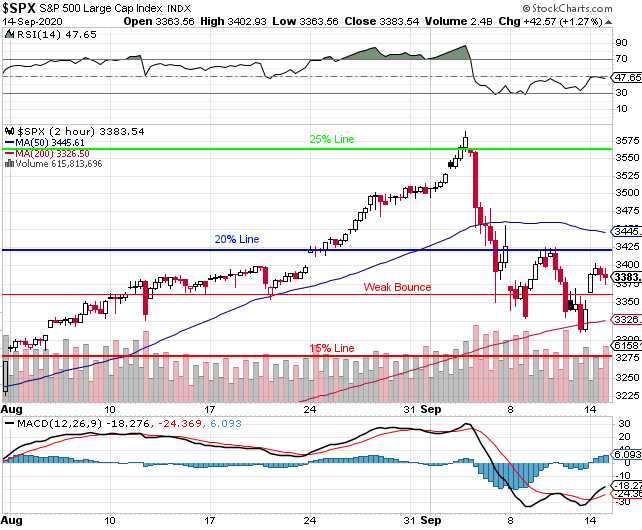 As we discussed last week (when we failed at 3,420), 3,420 is our Strong Bounce Line and the 20% Line so we knew we were likely to re-test it – the question is whether or not the S&P passes the test and we may find that out this morning as the Futures are pointing up yet another 1% – just like yesterday when we made most of our gains in the thinly-traded pre-market session.

We do have some actual good news this mornng as China's Retail Sales picked up nicely in August, which is good for the Chinese Economy but that has nothing to do with whether Western economies are picking up – we get our own Retail Sale Report on Wednesday.  If that matches, then it's good but it's still not record-high good, is it?

China’s economic recovery accelerated in August, with retail sales, the last noncooperative component, returning to pre-coronavirus levels by showing their first month of growth this year.

Now, with no local cases reported in weeks, shopping malls, restaurants and gyms across the country are packed with consumers again. Movie theaters—the last major holdout among public venues—reopened in late July. During the last 10 days of August, official data showed box-office revenue returning to 90% of year-earlier levels.