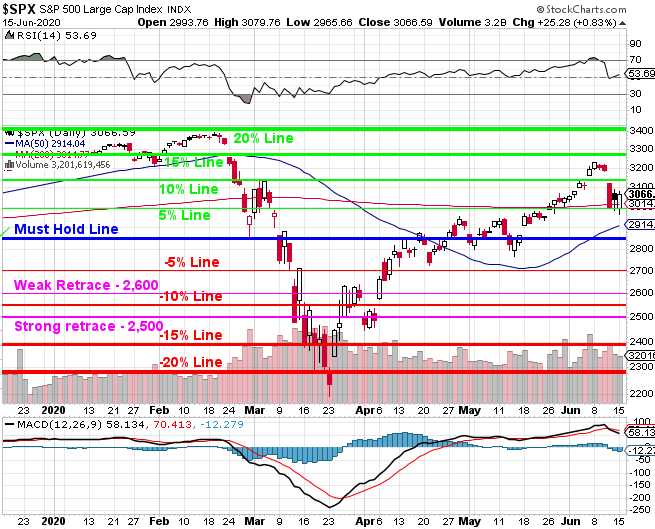 That's the mantra of the day as the S&P 500 tests our 10% level, again.  As you can see on the chart (click to biggerize), we bounced right off the 200-day moving average at 3,011 last week and we consolidated for 2 days and now we're going to take another run at the 10% line but I doubt we make it today – unless more stimulus is announced and that happens every other day anyway.

You wouldn't know we need stimulus in DelRay Beach, where I live, as the restaurants are packed and the streets are crowded.  That's why Florida has added 1,300 new virus cases per day in June and 1,700 yesterday (so it's accellerating) and there's 30 days in the month so maybe 45,000 new cases is half as many cases as all of China's total in a single month and la di dah – NO ONE FREAKIN' CARES!!!

WTF is wrong with you people?  I mean really!  Florida already has 77,326 Covid patients so 45,000 more puts us well over 100,000 – and Disney hasn't even opened yet – what a party that's going to be!  Please people, fly from all over the World to the airport in Orlando and let's re-infect every country from Florida's petri dish!

So far (it takes time to go critical), 12,015 of the 77,326 infected people have had to be hospitalized so I guess this is a make-work program for hospitals or is our goal to save the Social Security Program by elmiminating the recipients?  Before the re-opening, Florida had 700 new cases per day so, for you Fox fans, 1,700 per day is more than that. 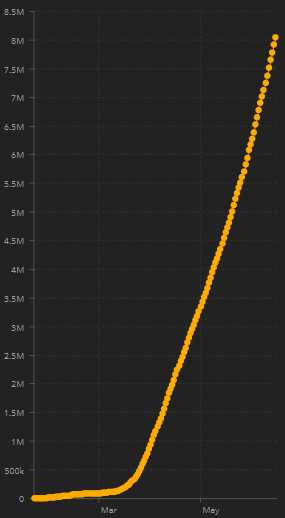 This is what I keep telling you guys – re-opening is a disaster when you haven't actually controlled the virus!  We are starting the re-infection process from a MUCH larger base than the 15 us cases we had when the virus first began spreading here in February and now we're STARTING AGAIN but from a base of hundreds of thousands of actively infected people standing next to you in the supermarket.  How do you THINK that is going to go?

The US leads the World with 2M of the 8M infections but Brazil is catching up to us with 888,271 followed…
END_OF_DOCUMENT_TOKEN_TO_BE_REPLACED