Wheeeee – that was fun! 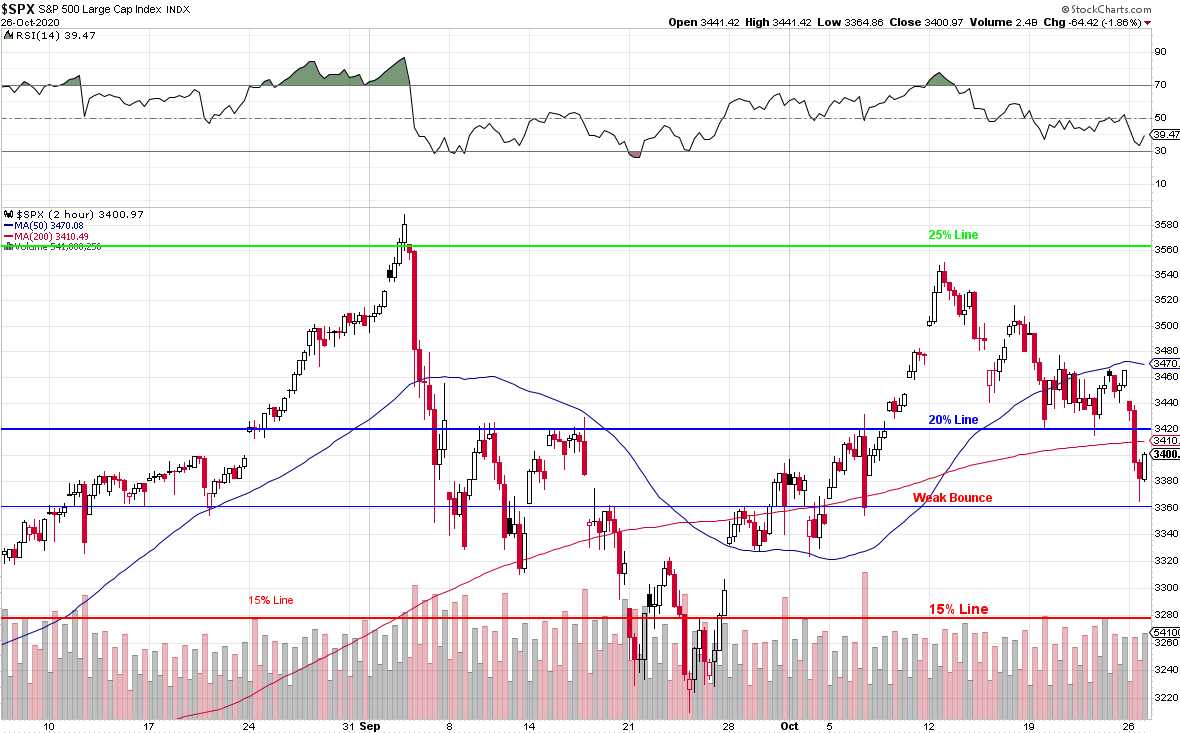 It only took a day to wipe out the rest of October's gains but we recovered a bit off the weak bounce line (of the 15% line) but that was sure to lend support so now we calculate the bounce lines off the bounce line and we fall from 3,562.50 (the 25% line) to 3,360 (the weak bounce line) and let's call that an even 200 points which makes the bounces 20% of that so 3,400 on the dot is the short-term weak bounce and 3,440 is the strong bounce but 3,410 is the 400-Hour (2 month) Moving Average on this short-term chart and that's about a month – so we'll have to respect that line followed by our 20% line at 3,420 – that's going to make it a tough slog to get back through that zone of resistance.

Keep in mind TA is totally BS, our 5% Rule™ is not TA – it's just math.  Math that is derived from the same formulas that drive the electronic trading that is 90% of all trading these days – so it works very well.  If you want to apply TA you shouldn't look at a chart's past but consider it's future.  We're significantly below the 100-hour (2-week) moving average and, since it's a fast-moving average, it's going to get pulled down quickly and that's going to turn that blue support line into a downtrending line of resistance and, since we are as much below it as we were above it at the moment – then we can imagine the downslope will match the upslope but, for that to happen, we'd have to be having days below the 15% line again so – if we can't pop back over that red 400-hour moving average this week, which also "happens" to be our 20% line heading into the election, then DOOM!!!! is a ahead for the market.

Of course DOOM!!!! is a relative term as we're miles up from the bottom but not far off the 3,200 we started the year at.  Earnings season has not been kind so far, as we've fallen almost 10% from our too highs since companies began reporting in earest and it hasn't been the data – as we haven't had too…
END_OF_DOCUMENT_TOKEN_TO_BE_REPLACED