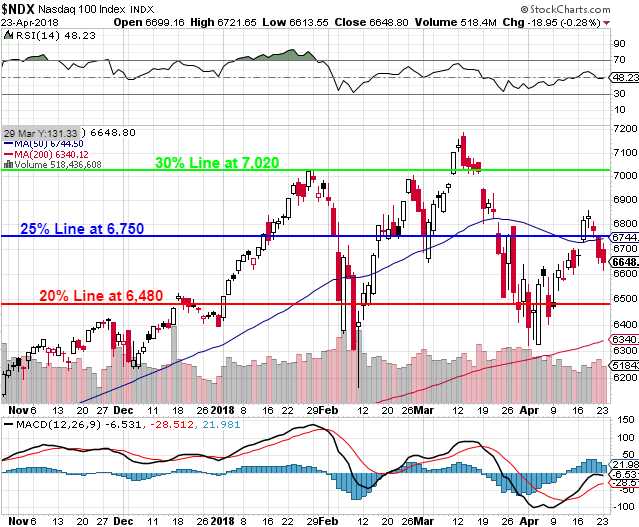 6,750 is the 25% line on the Nasdaq and we've been here a few times and the bulls were very excited to buy the dip at 6,650, as that's where we popped in early March but, as I noted to our Members in yesterday's Live Chat Room, we're simply repeating a pattern that was supposed to give us an up and down day yesterday that ended flat and today we should be up 30 points on the S&P and tomorrow 25 more and then we crash back to where we started to finish the week.

Can the market really be that programmed?  It will be interesting to see if the news and data actually matter or if we're simply doomed to repeat the behavior we observed from Feb 22nd-28th after two weeks of mirroring the behavior from Feb 5th-21st (see yesterday's morning report).  There's a fine line between being locked in a range and being trapped in a market that is being driven by trading bots.

When the markets are thinly traded, the Bots do dominate the trading and, if no one has a solid reason to re-program them, then they are going to keep trading the same way, over and over again until someone breaks the cycle.  According to Yahoo, the average volume of the S&P ETF (SPY) is 120M shares a day, but here's how it's been trading for the past week:

Monday Market Movement – No News is Good News Will We Hold It Wednesday – Nasdaq 7,000 Edition
Scroll to top