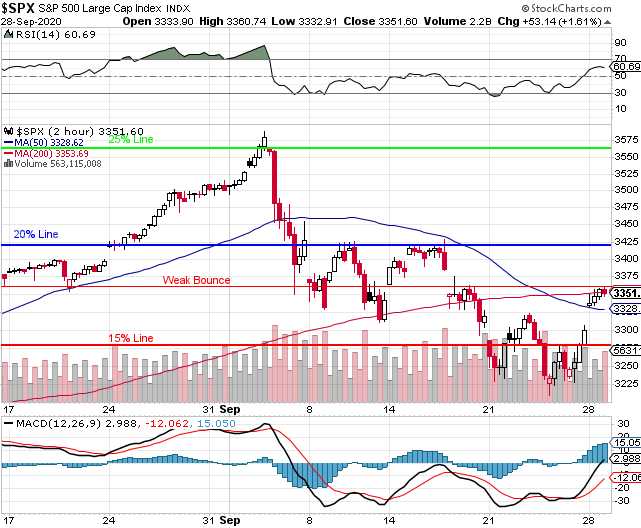 All going as planned so far.

As you can see from our chart, we're consolidating right in that zone between the 200-hour and 50-hour moving average and 3,350 is also the 50-day moving average, so it's a lot harsher resistance than you would think.  We gapped into that zone last week so we didn't "earn" it and we probably have very little support below the 50-hour moving average so, if we can't get back over 3,350 this week – that short bet on the S&P Futures (/ES) we discussed making yesterday could make a vey nice pay-off.

It would be one thing if we were moving up on good news but there's really not any good news to report – it's kind of depressing actually, as noted by John Oliver this weekend:

Here's the front page of the Wall Street Journal this morning:

Not exactly rally fuel is it?  205,000 (20%) of those 1M Global Deaths are in the USA, which has 4% of the Global population so Trump is killing his citizens at a rate which is 5x greater than other World leaders – GREATNESS!!!   President Ponzi will debate Sleepy Joe Biden this evening and that's going to be depressing.  Much as we need to get rid of Trump, Biden is simply not an exciting alternative.  He's "safe", not exciting.  Jimmy Carter was safe – at least he won.

Of course if Trump only loses by 2%, like Ford did, do you think he's going to go quietly?  He lost by 3M votes (5%) last election and he STILL became President.  This is the most important election of our lives, of America's life and we're all trapped in our homes while the votes are being suppressed.  My daughter is in college and

The Week Ahead – 3,350 is Critical for the S&P 500 Weakening Wednesday – Presidential Debate Spooks the Market
Scroll to top