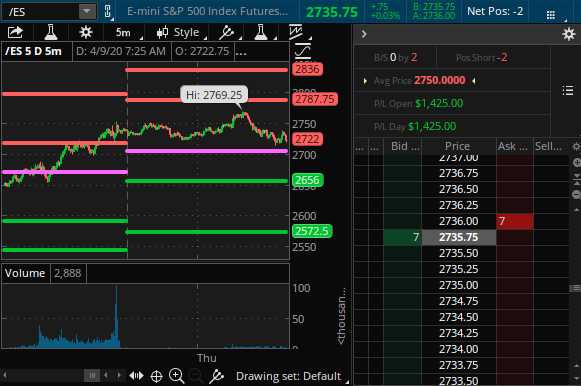 That's what happens next.  Our portfolios are long but very well-hedged and positioning ourselves pretty neutral going into the long weekend (markets are closed tomorrow for Good Friday) so we are able to use just a couple of S&P 500 (/ES) Futures shorts to flip ourselves more bearish into the weekend.

We discusses our reasons in detail in yesterday's Live Trading Webinar, after which I reiterated to our Members in our Live Chat Room:

I find it hard to believe people won't sell into the weekend, 2,750 is a good short on /ES with tight stops above.

As expected, we hit our entry goal this morning and we're back to 2,735 as of 7:10 but I expect a lot more selling into the weekend as Congress has no concrete plan for more stimulus and Team Trump continues to look inept in their handling of the situation and the numbers (which we also went over yesterday in detail) paint a pretty disturbing picture as 1/500 people in the US will be infected by Monday and World Wide Deaths will cross over 100,000 and, a week from Monday, over 2M people World Wilde will be infected with less than 500,000 recovered so it's a LOT early to be declaring victory.

Victory in the US is not victory.  Team Trump doesn't get that.  They don't even get that victory in Red States isn't a victory if Blue States still have the virus – they have an imaginary wall that runs through everything.  The Trump Administration won't even allow masks to be exported to Canada – Canada! – it's like a state!

"It's like one of your family members (says), 'OK, you go starve and we'll go feast on the rest of the meal.' I'm just so disappointed right now," Ford said.  "We have a great relationship with the U.S. and they pull these shenanigans? Unacceptable."

China is helping out by sending Canada 8M masks so, while we are distracted, Trump is alienating our allies and sending them into China's…
END_OF_DOCUMENT_TOKEN_TO_BE_REPLACED