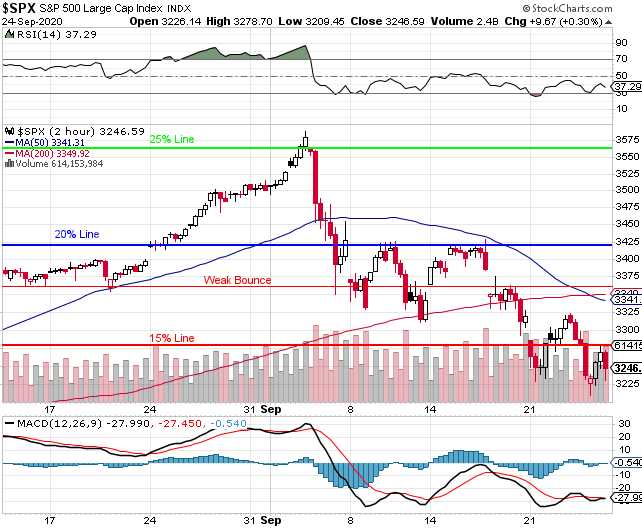 Everything is proceeding as I have foreseen.

In Monday's "The Week Ahead – 200,000 Deaths Weigh Heavily on the Market," we knew the 200,000th American death would put Covid back in the news cycle and there wasn't much chance of Powell making us feel any better as the Fed is pretty much out of firepower and Congress is MIA as far as stimulus goes and NO ONE is actually doing anything about the virus except for claiming what a great job they've done fighting the China virus – but we won't name names as that would just embarrass a normal human being who had either empathy for their fellow man or the intelligence to realize their incompetence has killed twice as many peeople as the Vietnam war – and this one is still going on – and we've all been drafted!

As we noted in Monday's Report:

“We have a very serious situation unfolding,” said Hans Kluge, the World Health Organization’s regional director for Europe. For the first time, he wore a mask at the press conference on Thursday. “The September case numbers should serve as a wakeup call for all of us.”

I'm sorry, I know this is depressing and not what we want to talk about in a stock market newsletter but this is REALITY and, as an investor, you can't afford to put your head in the sand and hide from unpleasantness because denying the reality of the situation can lead to even more unpleasantness in your portfolio when ignoring a problem doesn't make it go away.

As noted above, the global markets are only down 2% since Wuhan was first locked down on January 23rd yet the Global Economy has taken a 20% hit in Q2 and

Transfer of Power Thursday – “A Continuation” The Week Ahead – 3,350 is Critical for the S&P 500
Scroll to top