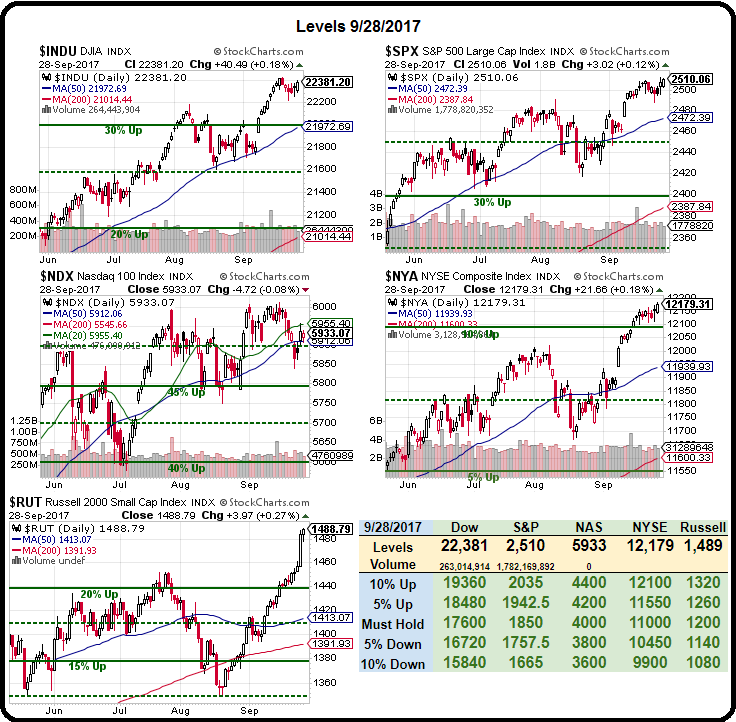 All of our indexes, exept the Nasdaq are at their highs and this party looks like it's never going to stop as long as people are willing to believe that Trump's tax plan will help the Middle Class or the Economy or that the Fed withdrawing stimulus will have no effect (even though adding stimulus had a HUGE effect) or that as long as you don't hear about North Korea for a week because people are worried about who's kneeling at a football game – that all is well in America.

And how can things not be great?  If the facts don't fit the narrative, they change the facts.  Treasury Secretary Steve Mnuchin told the press in Las Vegas that workers benefit the most from Corporate Tax Cuts and, if you think that sounds preposterous, you could have fact-checked it with a 2012 report from the Treasury's Office of Tax Analysis that showed workers pay 18% of Corporate taxes and owners pay 82% so what Mnuchin claimed is only about 450% untrue.   When challenged on this — the Treasury department REMOVED the report from the public records.

“Every record has been destroyed or falsified, every book rewritten, every picture has been repainted, every statue and street building has been renamed, every date has been altered. And the process is continuing day by day and minute by minute. History has stopped. Nothing exists except an endless present in which the Party is always right.” – Orwell, 1984 1984 was not meant to be an instruction manual!  It's not legal to alter or remove Government records – even if they do contradict with the bullshit you are currently spouting.  When Trump deletes his embarrassing tweets supporting politicians who get trounced in elections – he's committing a Federal offense in violation of the Presidential Records Act of 1978, which was introduced in the wake of the Watergate Scandal to prevent exactly the sort of thing this administration is doing.

Meanwhile, in another nod to Nixon, the Administration is compiliing an enemies list and…
END_OF_DOCUMENT_TOKEN_TO_BE_REPLACED