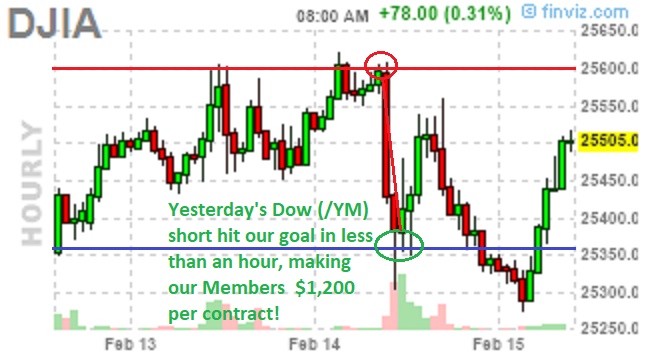 There is no trade deal.

That's why the Asian markets fell 1.5% this morning although, this morning, a lot of people are acting like we're making progress so the Futures are creeping up again – and that's fine with us as we'd LOVE to have an opportunity to short them for the 3rd day in a row.  We made $600 per contract from Wednesday Morning's Trade Idea and $1,200 per contract on Thursday Morning's Trade Idea (it only costs $3/day for you to get these ideas) and this morning we're HOPING to re-test 25,600 on the Dow (/YM) Futures but I think we're more likely to fail or, at best, drift into the holiday weekend.

If you cut through all the "he said, Xi said" noise of the trade rumors, the FACT of the matter is Lighthizer and Mnuchin just spent a week in China and accomplished nothing and now they are talking about extenting the March 1st deadline by at least 60 days, which is a major embarrasment for Trump, who set the arbitrary deadline and forced the problem in the first place.  We haven't even BEGUN to have trade talks with Europe or Japan and Trump has threatened more tariffs on each of them – even though we're not even sending a negotiating team.

This is very much in-line with my premise, which we discussed last week – that Trump DOESN'T want a trade deal – he just wants the tariff money and as long as his base remains too dumb to understand that THEY are the ones paying these tariffs – not China, not Mexico, not Europe or Japan – then Trump can use the tariffs to help "balance" his budget.  I put "balance" in quotes because, when you are running a $1.2Tn annual deficit (yes, it's up 20% since last time I looked) – giving up a projected $200Bn in tariffs would raise your deficit another 20% and you would, officially, be the WORST PRESIDENT EVER!

As noted by Bloomberg: "Trump appears to have over-estimated his own power in these talks. There is a reason the original package of U.S. demands to China was dubbed the “surrender-or-die” list by experts. Trump’s trade hawks believe nothing short of a Chinese…
END_OF_DOCUMENT_TOKEN_TO_BE_REPLACED