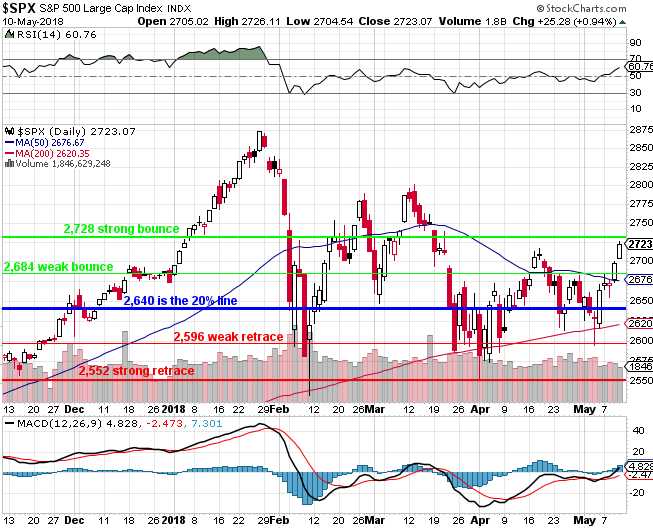 What a week it has been!

The S&P 500 has blasted off our 20% line (that's 20% above fair value, by the way) to the 23.33% line at 2,728 and that's what we call a strong bounce from the fall we endured way back in late Jan/early Feb and doesn't actually mean a thing until we're over it.  Otherwise, it's just a the top of the same trading range we've been in all year.

This morning we have the Fed's Bullard speaking at 8:30, who used to be reliably hawkish but turned doveish last year – so anything can happen when he gives a speech this morning at his local Business Development Corporation (Springfield, MO) on "US Monetary and Economic Policy."  People tend to get a bit more real when talking to their hometown crowd – like the time Trump boasted that he "could stand in the middle of 5th Avenue and shoot somebody and I wouldn't lose votes" to illustrate how blindly loyal his base was.

In our Live Member Chat Room (my "hometown" audience), I called for shorting the S&P (/ES) at 2,725 this morning as well as the Nasdaq.  Here it is in context.

Markets holding on to yesterday's gains so far.   All about that strong bounce line.

Bullard speaking at 8:30 so we'll see what he has to say and then Consumer Sentiment probably decreasing a bit at 10, but nothing likely to move the market other than Trump's Drug speech later and that's bound to spook that sector so I'd short /ES here (2,725) as we know they have trouble at 2,728 so $150 loss limit but very likely to give us a little run lower (though maybe wait until Bullard to be sure).

Trilling Thursday – Moving Back to the High End of the Range? Just Another Manic Monday
Scroll to top