Nasdaq (/NQ) 7,000 seems like a lovely shorting line and we grabbed a couple this morning in our Live Member Chat Room along with Russell (/RTY) shorts at 1,580 – these are now the June contracts, so they are a little higher than our shorting lines earlier in the week but essentially the same.  Not only that but we bought back half the covers on our primary SQQQ short yesterday afternoon – essentially flipping us much more bearish into the weekend.

We have Non-Farm Payrolls out at 8:30 and economists expect 200,000 jobs to be created, which is the same amount of jobs we always create – there has been no improvement at all under Trump and, in fact, we've been drifting lower but hourly earnings are on the rise (due to Obama-era Minimum Wage increases that are kicking in now) and that's good for the economy – though not so great for Corporate Margins.

With unemployment hovering around 4% – everyone is working so the labor market is tight and we're expecting to see some serious wage inflation over the next few years that, in turn, sparks a broader inflationary cycle in the economy.  In fact, China was ahead of us in increasing wages (still much lower than ours) and now they have 2.9% inflation – double what it was a month ago but possibly a blip from the New Year celebrations last month. 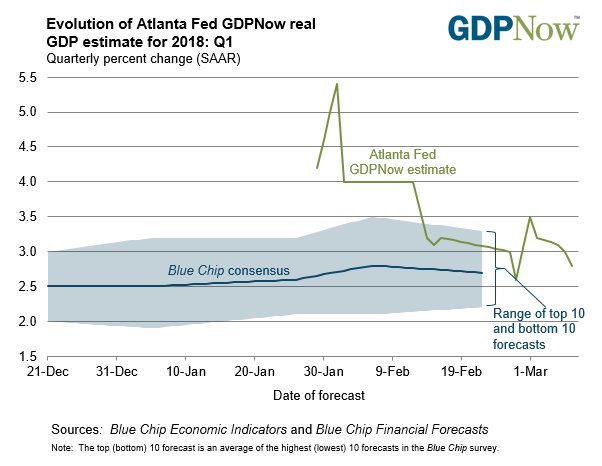 Meahwhile, the GDP estimates are in free-fall and no one seems to notice, no one seems to care as the Atlanta Fed has taken their ridiculously optimistic GDP Now forecast down from 5%, which rallied the markets…
END_OF_DOCUMENT_TOKEN_TO_BE_REPLACED