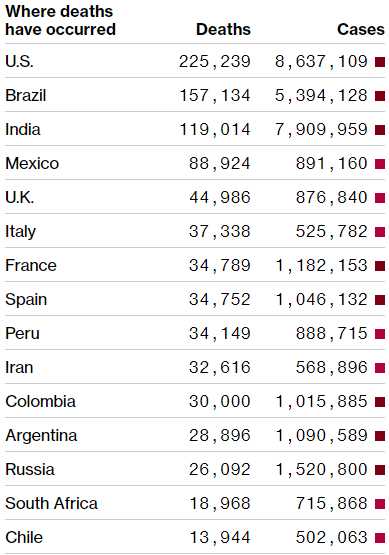 At this pace, in 4 more days anther 240,000 American citizens will hve the "China Virus" – named so by the President despite the fact that, to this day, less than 100,000 Chinese citizens have caught the virus – TOTAL!  By election day, 480,000 more Americans will be infected, more than Germany's 8-month total and, at over 60,000 infections per day (more than Singapore or Ireland's totals), we are now pacing at a new record of infections heading into an election to decide between a candidate who belives the virus is a major threat and one who doesn't.

Keep in mind these infections are increasing and, with 8,637,000 Americans now infected (one in 38 people), if we don't DRASTICALLY change our ways (hint, hint for next Tuesday!), we are on a truly disastrous path that is not only a threat to your health – but a dire threat to our economy as well.  This is the ticking time bomb Trump is leaving us, whether he stays in office or not.  Like George Bush II's economic collapse before him, the Democrats will inherit a disaster in progress which the next Republican Candidate will try to blame on the Democrats – and not the man who truly caused it.

I would almost hope Trump does get re-elected – so that people will truly see him trapped in a bankruptcy he won't be able to walk away from but that bankruptcy – Moral, Ethical, Evironmental, Financial, Health and Reputational – is our bankruptcy and the bankruptcy of our children, which will take many, many years to recover from.