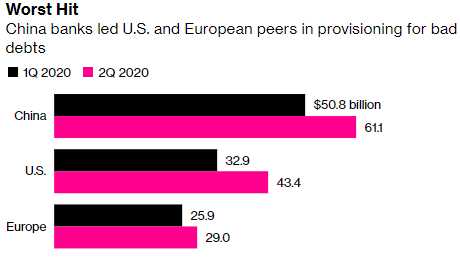 Chinese banks are under increasing stress.

Profits are plunging at the fastest pace in at least a decade, bad debt has hit a record and capital buffers are eroding. Bank executives and analysts predict the damage is likely to continue in the second half of this year.  It’s also of global importance, with behemoths such as Industrial & Commercial Bank of China Ltd., the world’s largest lender by assets, and China Construction Bank Corp. on the global “too-big-to-fail” list.

And, keep in mind that China's GDP is approximately 1/2 of the US or Europe's GDP so those numbers are, relatively, twice as bad as they look in proportion to their economy.  “The government needs to strike a balance between sacrificing the banking sector for the economic recovery and maintaining financial stability,” said May Yan of UBS. “The call for national service from the largest banks can’t go on forever. A weak financial system is very dangerous to the nation.” 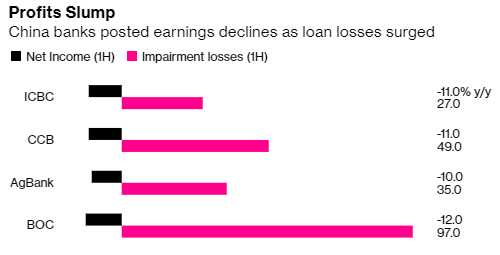 Non-performing loans in China in June (last published month) were $395Bn and that has exausted the "Bad Loan Coverage Ratio" which was 3% in 2012 and is now sitting at 0.5% (as of June) and falling fast.  As part of the pandemic response, China has allowed many borrowers to delay interest and principal payments to March next year, which is hiding the true sense of the bad debt bulge.

Profit at China’s biggest banks declined by at least 10% in the first half from a year earlier, the biggest drop on record as bad loans ballooned. In a worst-case scenario of government pressure, China’s lenders could be guided to lower profits by 20% to 25% in 2020, according to Jefferies analyst Shujin Chen. That will erode capital even further and be a risk to financial stability, she said.

It's not just China that is becoming unstable, of course.  Our own Congressional Budget Office reports that the Federal Budget Deficit will hit $3.3 TRILLION this year, more than is collected in income taxes – so they can double your taxes and we'd STILL be running a deficit!  How do you think that's going to work out?

Record High Wednesday – Up, Up and More Up TGIF – The Holidays Can’t Come too Soon
Scroll to top