Hubaei (center of the virus outbreak) has asked firms not to resume work until March 11th.  It's Feb 20th so that's only 3 weeks from now – why should that concern anyone?  I'm sure things are fine.  Chinese companies (as I predicted, thank you) have been unable to pay their workers, delaying paychecks and cutting salaries.  That's fine.  Shopping malls and restaurants are empty; amusement parks and theaters are closed; non-essential travel is all but forbidden.  Fine.

“A week of unpaid leave is very painful,” said Jason Lam, 32, who was furloughed from his job as a chef in a high-end restaurant in Hong Kong’s Tsim Sha Tsui neighborhood. “I don’t have enough income to cover my spending this month.”

He's fine.  “The coronavirus may hit Chinese consumption harder than SARS 17 years ago,” said Chang Shu, Chief Asia Economist for Bloomberg Intelligence. “And SARS walloped consumption.”  That's fine.  Without full, regular paychecks and few places to spend them these days anyway, Chinese consumers could cut spending in some categories to zero, said Shu. And it may not bounce back: For example, she said, if you skip your daily latte for two months, you’re not likely to make up for those missed drinks later in the year.  SBUX is fine.

Rick Zeng, deputy general manager at the Lionsgate theme park in Zhuhai, said they’ve been shut down on government orders since the end of January. Starting next week, some staff will need to go on unpaid leave.  In the southeastern city of Fuzhou, hotel manager Robert Zhang said all but two or three of his 100 rooms are vacant on average nights. Two-thirds of the employees are effectively on furlough, getting some salary but not as much as they’re used to.  They're fine. 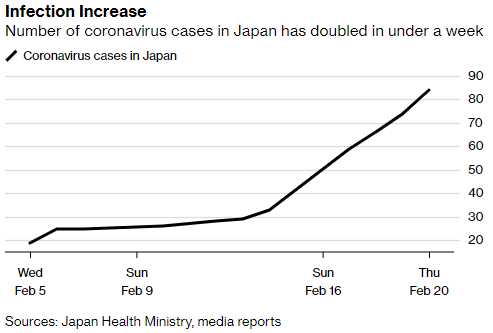 South Korea's number of virus cases went from 31 yesterday to 104 this morning (up 235% in a day) and they had their first death from the virus this morning. …
END_OF_DOCUMENT_TOKEN_TO_BE_REPLACED