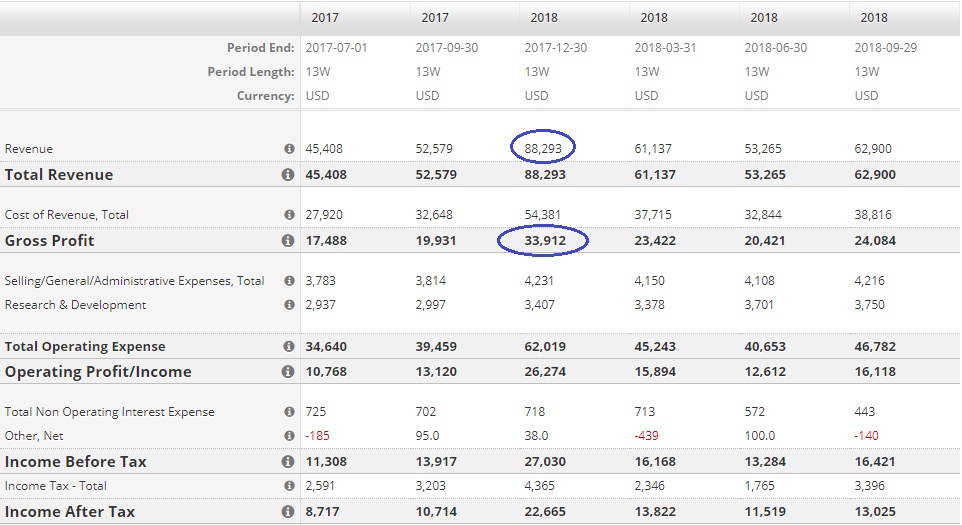 That's right folks, Apple (AAPL) issued a rare warning last night as CEO, Tim Cook said trade wars (including a Chinese boycott of Apple) have hurt even the World's Greatest Company and they would "only" sell $84Bn in their Q1 (normal people's Q4) which is $9Bn (10%) less than the high end of guidance.  AAPL also guided gross margin lower, to 38% so we can now whip out our iPad Calculator and say $84Bn x 0.38 = $31.92Bn in gross profit which is – GASP!!! – almost $2Bn less than they earned last year in Q1.  OMG – SELLSELLSELL!!!!

That was sarcasm, of course – we're buying.  $84Bn is $4Bn less sales (5%) than last year and $2Bn less profit is 6% lower and of course we don't like to see our companies taking steps backwards but this is another one of those self-inflicted wounds Trump is causing to our economy and Apple is the biggest company in our economy – so of course they are going to feel some pain. We already took a long position on the Nasdaq Futures (/NQ) at 6,200 in our Live Member Chat Room as I put out a note at 4:55 am.  Clearly the sell-off is an over-reaction that has no basis in reality, but that won't stop AAPL from going lower as idiot analysts jump on the bandwagon and downgrade it – we will just have to be patient.  The Nasdaq drifted along around 6,200 until just about 7am, when it blasted higher, to 6,250 for a quick $1,000 per contract gain – a nice way to start our day!

I'm not going to make a case for AAPL as it's boring, I was bored back in May when AAPL droped from $181 to $158 on "disappointing" earnings – which did a good job of flushing out the retail suckers before they blasted to $232 on the July earnings report.  You really can fool some of the people all of the time and all of the people some of the time – especially when they are Apple traders!  Of course when hedge funds need a boost, they like to load up on big stocks like AAPL but how do they get them to be cheaper?  We…
END_OF_DOCUMENT_TOKEN_TO_BE_REPLACED