Pump it up until you can feel it.
Pump it up when you don't really need it." – Elvis

Today marks two weeks at the strong bounce line and an optimist would say we're consolidating for a move up but a pragmatist would say this is all being done on low-volume BS pump jobs that are faking market highs by holding up the headline stocks while the broad market sells off – leaving the retail suckers holding the bag when the bottom ultimately falls out.

Notice how, nearly every day, we hit a high early in the day and then sell off?  That's how you catch big game fish, you give them a little line and then you reel them in and then give them a little line and reel them in again – over and over until they are exhaused and you can haul them onto the boat and gut them and have them for dinner.  That's what's happening to Retail Investors at the moment and the Top 1% are baiting the hooks. 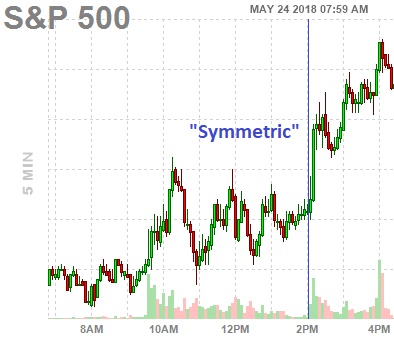 Yesterday the market blasted higher on the release of the Fed Minutes, which didn't really say much other than the addition of the word "symmetric" but it was used in regards to INFLATION, not rates.  Here's the context of the statement that got the market "so excited" yesterday afternoon:

"Participants generally expected that further gradual increases in the target range for the federal funds rate would be consistent with solid expansion of economic activity, strong labor market conditions, and inflation near the Committee's symmetric 2 percent objective over the medium term. Participants generally viewed the risks to the economic outlook to be roughly balanced."

Now, keep in mind this a 5-minute chart so it took less than 5 minutes of reading the minutes for traders (bots) to decide that the minutes were doveish and blast…
END_OF_DOCUMENT_TOKEN_TO_BE_REPLACED

Weakening Wednesday – We Are Loving Our CASH!!! TGIF – A Nothing Week in the Markets Dribbles to a Close
Scroll to top