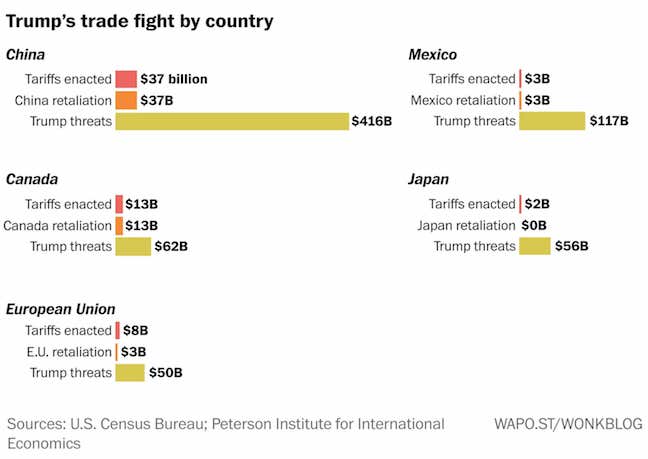 Another $16Bn in tariffs.

Or, should I say, another $4Bn in taxes against the American Consumer placed by Trump causes another $4Bn of Import Duties to be place on US goods we are trying to sell to China.  That's the real impact of the announced "$16Bn in tariffs" that Trump gleefully announced on Tuesday, which was immediately followed by an exact retailiation by China yesterday.

“This is very unreasonable,” China's Ministry of Commerce said, “In order to defend China’s rightful interests and the multilateral trade system, China has to retaliate as necessary.”

This brings our cross-tariffs with China up to $50Bn and we already know there were painful effects from the first $20Bn so this is 150% more pain for US companies and 150% more taxes on US Consumers but still a drop in the bucket compared to the $500Bn in taxes Trump has threatened to place on US Consumers who buy Chinese goods.  That's all a tariff is, it's a tax that punshes consumers for buying certain items from certain countries – the behavior they are trying to change is yours – not China's!

Now, who do you think will be more successful in getting their people to change their habits?  If it were Japan, we would have already lost this trade war as they Japanese people tend to obey Government edicts but Chinese people are a bit more like Americans, making independent choices though, on the whole, they tend not to fight the Government unless it's important while Americans generally ignore the Government and do whatever they want. 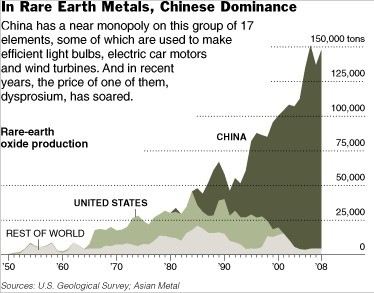 We're not there yet but if the Chinese Government declares it "unpatriotic" to buy American goods – our exports to China can ground to a very quick halt.  China can also hit us where it hurts on Rare Earth Materials, which China makes 90% of for the Planet Earth, not because they are actually rare but because producing them causes levels of pollution that most countries find unacceptable.

Now, you can say that Trump can lift restrictions on strip-mining and lift all enviromental protections "for the sake of…
END_OF_DOCUMENT_TOKEN_TO_BE_REPLACED