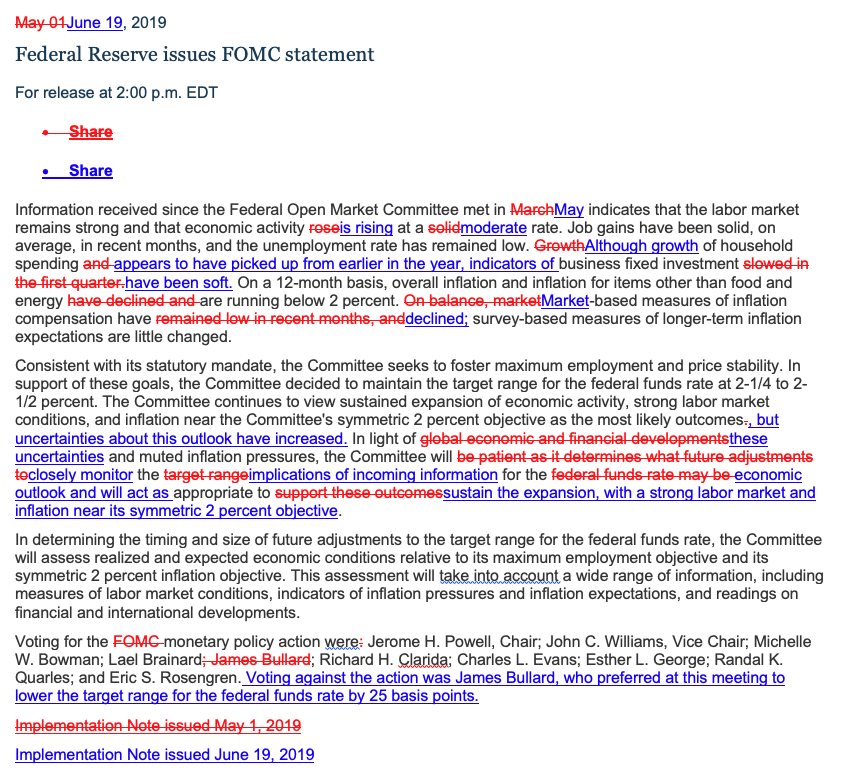 “The case for somewhat more accommodative policy has strengthened.”

That is the phrase investors are taking to the bank from Powell's press conference yesterday.  While the Fed Chairman didn't bow to Trump's pressure to deliver an immediate cut – he did leave the door open to interpretation that he was willing to cut rates the moment the economy begins to falter – giving investors a "Powell Put" to the market.

It wasn't the US markets that took Powell's statement as bullish but overnight the spin was in and now the Dow Futures are up 250 points as the spin doctors chimed in overnight to take any stray word Powell said and treat is like it was policy:

For the Fed to not cut rates at its July meeting, “it would take all of the data coming in to be consistently strong,” together with an end to trade-related uncertainty, said Seth Carpenter, chief U.S. economist at UBS.

The central bank’s rate-setting committee on Wednesday dropped language from its policy statement describing its stance as “patient”—which implied rates were on hold. Instead, it said uncertainties about the economic outlook have increased, a phrase it has used during past periods of rate cuts.  “The committee will closely monitor the implications of incoming information for the economic outlook and will act as appropriate to sustain the expansion,” the statement said.

Of course that means that IF Trump makes a Trade Deal with China or tensions with Iran calm down or earnings or economic data improve – then the Fed will have no reason to cut so will good economic news be bad news for the markets going forward?  We'll have to see but, for now, the madness continues.

Record High Wednesday – Will the Fed Pop Us or Drop Us? TGIF – Four Witches Test the Market Highs
Scroll to top