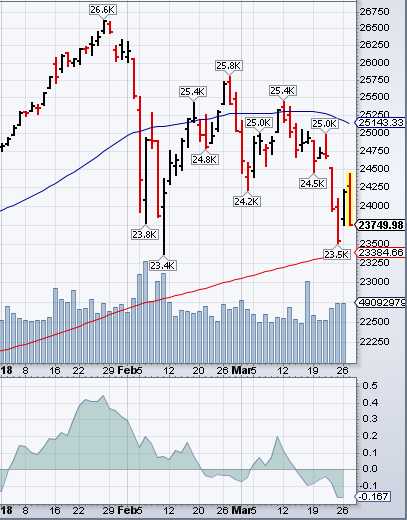 Today is the last day of the quarter because tomorrow is a holiday and Monday is spring break (I'll be in Florida) so the volume is very low and nothing the markets do today or even next week are going to matter much.  If we can't claw back over 24,300 by the end of next week – it's not going to happen.

Next week is still sleepy for earnings as well and April 13th is the official kick-off for earnings season, with CitiGroup (C), First Horizon (FHN), First Republic (FRC), JP Morgan (JPM), PNC (PNC) and Wells Fargo (boo!) all reporting that Friday the 13th morning – good luck to all of us!  We did very well shorting XLF into January earnings but, like the market, we're down 10% from there so it's a bit tricker to call now – I think we'll just wait and see if that $27 line holds but, if not, another 10% down should do the trick.