Things are just getting nuts now.  Trump declares unilateral trade war on China, China retaliates, White House says "just kidding" and then Trump says "not kidding" and TRIPLES the tariffs by adding $100Bn more and then he literally tosses out his prepared speech as it would be "too boring" and then began ranting about immigrants, claiming they illegally voted against him and that women are being raped by them "at levels that nobody has ever seen before – THEY don't want to mention that."

The only thing we can count on these days is chaos and God bless it because we're having THE best time trading it!  In our Live Chat Room yesterday, when the White House was busy walking back Trump's earlier comments on trade, I said to our Members: 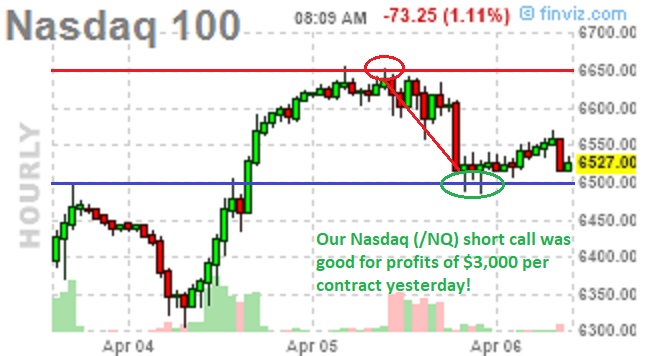 That was our only official play of the day but it was good for profits of $3,000 per contract so, no need for more, right?  We knew 6,650 was going to be resistance (between our weak and strong bounces) and, of course, we also knew Trump was going to continue to attack Amazon (AMZN) and that casts a shadow on the whole tech sector because – if the President of the US can harrass one tech company – what's to stop him from going after others and, with that precident set – what's to stop every World Leader from going after their political business enemies like Trump does?

America used to lead by example and God help us all if the rest of the World begins to follow our current example!

As noted by Joe Scarborough on MSNBC: "Lies about [Amazon], causes its stock to go down. I’ve watched enough episodes of Billions to know that if you’ve spread lies about a…
END_OF_DOCUMENT_TOKEN_TO_BE_REPLACED