The WSJ says: "U.S.-China Trade Talks End With No Sign of Progress"

As we predicted, trade talks between the U.S. and China failed to produce any visible sign of progress, reducing the prospects of a deal soon, people closely tracking the talks said.  The statement was significant for what it didn’t say as well, people said after the talks. There was no discussion of follow-up talks or any accomplishments.

For now, the U.S. continues to turn to tariffs to pressure China. As negotiations wrapped up on Thursday, the U.S. put in place $16 billion in tariffs on Chinese goods, raising the total to $50 billion. The Chinese have matched them dollar for dollar.  Public hearings continued on U.S. plans to hit another $200 billion in Chinese imports with tariffs as high as 25%, which would place levies on about half of Chinese imports. If the U.S. continues on the same schedule as in the past, those tariffs could start to take effect in September.

As I explained in yesterday morning's report, Trump has no interest in ending the Trade War with China as these "tariffs" are nothing more than a 25% tax on consumer goods purchased by the average American which fund tax cuts for the above-average American, who are better than you because they have more money – so don't complain! 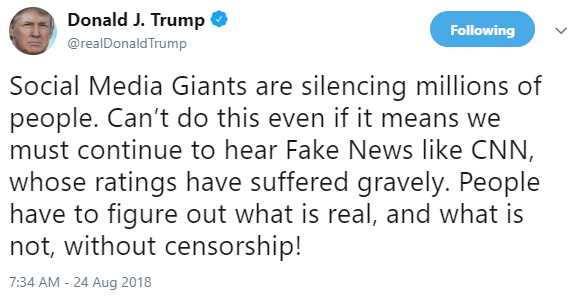 President Trump is complaining that Twitter, Facebook and others are cracking down on Russian Hackers, White Nationalists, Hate Mongers and Bots which spread Fake News in Social Media (often from Russian Troll Farms).  It may be difficult for Republican Congresspeople to get elected without all the fake news and fake supporters and, of course, it's a fantastic distraction as the real news flow is turning towards articles of impeachment as more and more of Trump's inner circle is convicted or "flips" on him – something else he's been complaining about.

Obviously, people who are not guilty do not complain of their associates "flipping" on them and they don't decry plea-bargain agreements and they don't screem for the Attorney General to halt investigations – especially when they are effectively uncovering many, many, MANY crimes.  No, this is what guilty people do – especially when they are the heads…
END_OF_DOCUMENT_TOKEN_TO_BE_REPLACED

Trade War Thursday – US and China Sitting Down Gives Markets Hope Monday Market Movement – NAFTA “Fixed”? Of Course, that calls for a RECORD...
Scroll to top