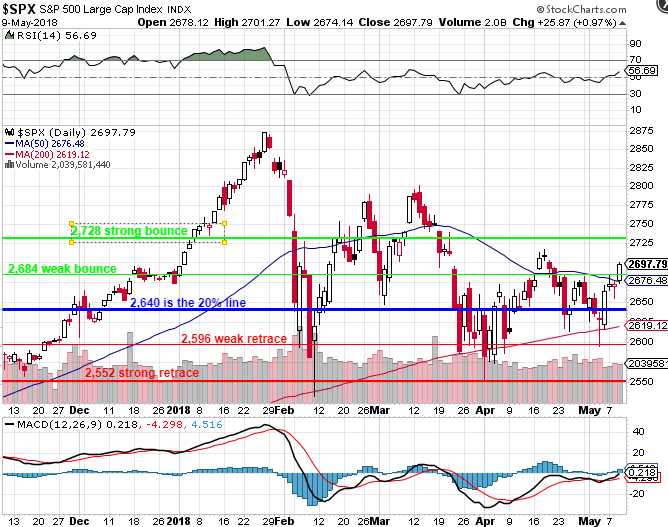 I don't want to get to excited but:

As we expected, yesterday was a fantastic day to cash out as there were buyers for our overpriced stocks all day long.  Have a good vacation smart people who took my advice!  We're expecting to top out at 2,720 (April's high) on /ES and then we'll try a short again but, as we did in yesterday's Live Trading Webinar (replay available here), we're still shorting the Russell (/RTY) below the 1,600 line (tight stops above) and /ES if they fail 2,700 – because we'd hate to miss that fun.  Dow (/YM) below 24,500 and Nasdaq (/NQ) below 6,900 would confirm weakness.

For the rest of you, let's smash our heads in with those copper cups they serve Moscow Mules in (after drinking it, of course!) so we can get in the right frame of mind to pretend this BS market is worth talking about.  Ah, I remember Club Maximus in New City, NY when Monday's were Kamikaze Night and they played New Wave Music and served 3 shots for $1.   A Moscow Mule is really a Kamikaze but somehow they decided Kamikaze was insensitive or something.  Anway, back then you could get in if you LOOKED 18 so I was drinking there since I was 15, in 1978 and we'd drop $5 on the bar and the bartender would line up 15 shot glass and fill them all up, spilling plenty on the bar as well – ah, good times!  Then we'd dance to these songs:

Having 15 drinks in front of…
END_OF_DOCUMENT_TOKEN_TO_BE_REPLACED