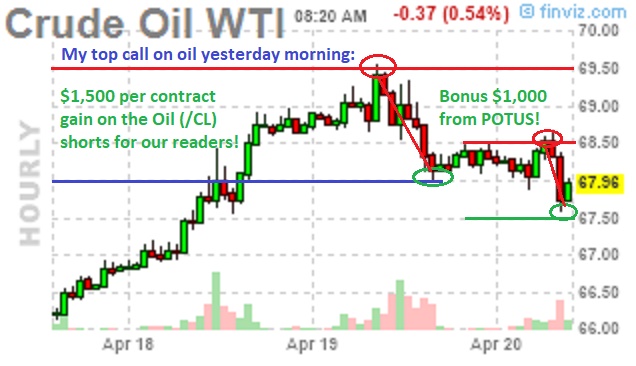 I am now a Donald Trump fan!

Yesterday morning I was interviewed on the Benzinga Pre-Market Show where our trade of the day was to short Oil (/CL) (USO) Futures at $69.50 and, during the day yesterday we got had a nice $1,500 per contract gain as oil dropped to $68 and then, this morning, as oil climbed back to $68.50, where we wanted to short again, our beloved President, Donald J. Trump tweeted out exactly what I had said yesterday afternoon at my Nasdaq interview, with the President saying:

Needless to say we are thrilled, not just with the money but with the President's ability to summarize what we say during a 5-minute interview in a single tweet – THAT'S LEADERSHIP!  Now, if the President would just put me in charge of the Strategic Petroleum Reserve and stake me with the Treasury, we could pay off the National debt in no time buying and selling oil contracts.

We wouldn't need OPEC to back down if we simply break the NYMEX and we could do that by calling their bluff and promising to sell their fake, Fake, FAKE orders for 223M barrels of oil for May delivery, which we said last Friday would be cancelled or rolled by today and, lo and behold, as of this morning, there are only 26,672 contracts left open for May delivery, representing just 26.6M barrels (90% cancelled) and that will be cut in half today, leaving the US with just 13Mb imported to Cushing at $67.50 per barrel when, earlier this month, we had "orders" for over 500M barrels at $62.50 that were canceled by the criminal NYMEX trading cartel WHO ARE UNDERMINING THE ENERGY SECURITY OF THE UNITED STATES, which happens to be TREASON!

Well, the orders were not "cancelled" – they "roll" the orders into other months to FAKE demand there as well and this little shell game pushes the price of oil up and up and costs US Consumers Billions of Dollars at the pump every month.  In fact, this month's $5 gain x 20M barrels a day x 30 days is $3Bn we're being screwed out of in April alone.  On the…
END_OF_DOCUMENT_TOKEN_TO_BE_REPLACED