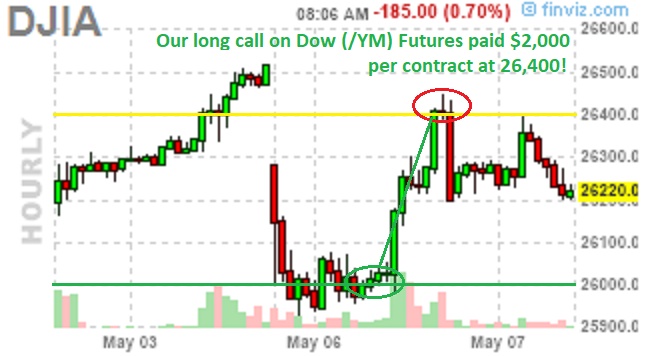 Is this fun or what?

After being down 500 points in the morning, the Dow almost fully recovered into the close, getting all the way back to 26,400, which was a lovely $2,000 per contract gain on our Futures play from yesterday's Morning Report.  Playing a pre-market move like that for a bounce off support – especially when the "news" was a tweet from the President that had no official standing ("the whim of a madman").

This morning we have Team Trump accusing China of reneging in it's trade commitments, which is an odd thing to say as they are in the middle of negotiating so nothing is actually commited yet.  Also, unfortunately, the Trump Administration says many, many things that are not true – so it's kind of hard to take their word over China's – even though they are "on our side".  In fact, this past weekend, Trump celebrated his 10,000th false statement since he took office less than 1,000 days ago.  Trump has single-handedly created an entire division of fact-checkers, now employed at almost every media outlet and he does keep them busy at over 10 lies per day.

Yesterday's briefing from Lighthizer (the anti-China fanatic) and Mnuchin (withholder of Trump's tax returns), which took place after U.S. markets closed on Monday, made it clear there are deep concerns about the direction of the talks and the Futures tanked again and are still down more than half a point this morning but not so low that we want to go long again.

“The level of brinkmanship on both sides and their obvious mutual distrust has made the path to even a temporary cease-fire a lot murkier than just a few days ago,” said Eswar Prasad, professor of trade policy at Cornell University. “It is likely a cooling-off period will be needed to get the talks back on track, but the imposition of additional tariffs by the U.S. later this week could keep the talks derailed for a while to come.”