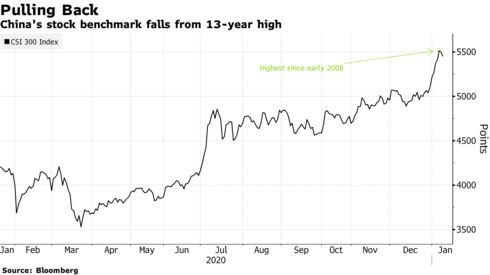 The weather isn't the only thing turning cold.

Chinese stocks fell the most in three weeks, led by consumer shares and commodity producers, amid concern valuations for the most popular stocks were stretched and as metal prices slumped.  The CSI 300 Index dropped as much 1.5% before paring losses to 1% at the close. Gauges tracking energy, consumer staples and materials producers slumped more than 2%.

Some 39 Chinese companies both domestically and offshore defaulted on nearly $30 billion of bonds in 2020, pushing the total value 14% above 2019’s.  Defaults by Chinese companies are likely to top last year’s record as tighter monetary policy squeezes borrowers, according to China Merchants Securities Co. 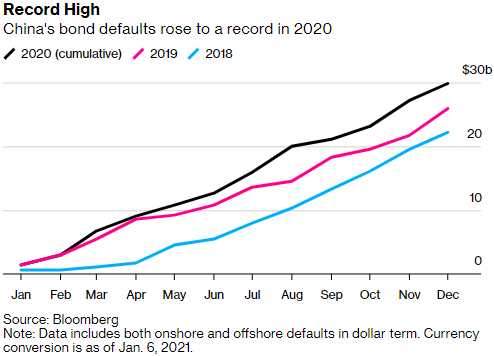 “The central bank will implement more prudent monetary policies this year,” said Yuze Li, a credit analyst at China Merchants Securities. “More companies may face refinancing pressure. As the maturities jump, the default amounts will climb by an estimated 10%-30% from the previous year,” he said, referring to both onshore and offshore defaults.

In the dollar-bond market, the financial sector accounted for about 43% of total defaults, followed by technology and energy. ?Five state-linked companies defaulted for the first time in the onshore bond market, the most since 2016.

Monday Market Movement – Down for a Change Which Way Wednesday – S&P 3,800 Edition
Scroll to top