Sell-offs are so much fun when you are ready for them.  We added Delta (DAL) yesterday as a Top Trade Alert since we like the sale price ($52) and were able to construct a nice income-producting trade while we wait for earnings on Thursday.  We can afford to do that because we always hedge our portfolios and keep plenty of cash available for bargain-hunting while others are panicking.  Times like these are when we like to do our shopping!

Futures are down again this morning as the IMF cuts it's forecast for Global Growth due to the escalating trade wars to which we say – DUH!  To this day what surprises me most about traders (and my fellow analysts) is how oblivious they can be to macro changes until someone of authority points it out for them.  Who could have possibly believed trade wars would be good for the Global GDP?  Only someone listening to Trump and his team of Economorons with no logic filter could possibly think what they are doing is pro-growth. 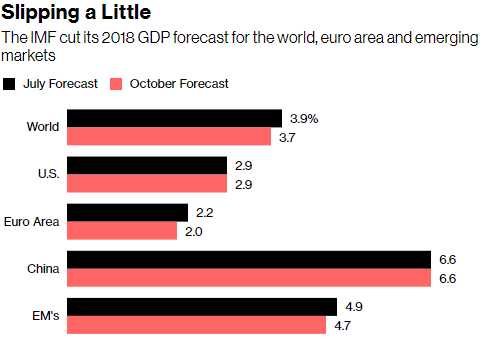 Global Groth is still 3.7%, which is not bad but it's worse than the 3.9% forecast they had just 3 months ago and, since trade tensions are getting worse and since Trump is still threatening to ratched tarriffs up from the current $110Bn to $500Bn – we can expect the IMF to downgrade the growth forecasts another couple of times down the road.  Will this also shock and surprise traders?

Oddly enough, the US and China's forecast is steady, though Trump will be disappointed to miss his 3% promise.  Europe and the Emerging markets are suffering so far but the IMF indicates escalating Trade Wars could knock another 0.8% off the global total – which would be a disaster.  The IMF has already cut the US forecast to 2.5% next year so the trend is down – even at the current trade levels.

Meanwhile, things in Europe are getting even more stressful as French President Emmanuel Macron, who just won last year with 66% of the vote, now has his support at just 34% followiing a recent poll after a series of scandals and a government shake-up.  While…
END_OF_DOCUMENT_TOKEN_TO_BE_REPLACED