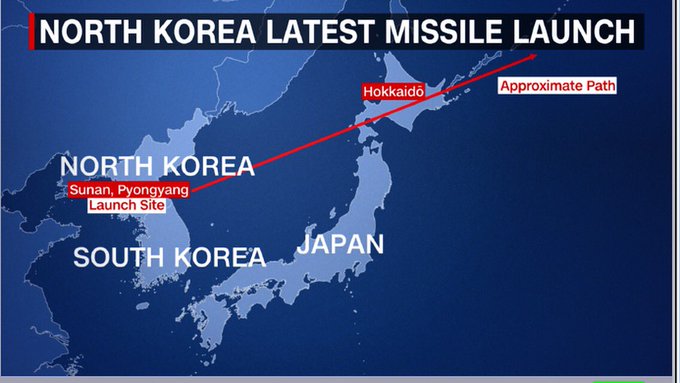 It's always something, right?

We don't know what specific event we are hedging against but mornings like this remind us WHY we hedge our portfolios.  When the market is priced to perfection, it doesn't take a great deal of effort to bring it down and, this morning, all it took was North Korea firing a small test missile 1,700 miles, right over the top of Japan.

While the missile was still in the air, Japanese authorities sent an alert to northern areas near its path.  “A missile has apparently been launched from North Korea. Please take refuge in a sturdy building or underground,” the alert said. The warning was lifted a few minutes later, after the missile went down in the Pacific.  Japanese Defense Minister Itsunori Onodera said initial analysis suggests the missile was an intermediate-range ballistic missile of the same type that North Korea fired on May 14th.

Just last week U.S. Secretary of State, Rex Tillerson, praised North Korea for exercising “restraint” in not having conducted any missile tests during joint annual exercises between the U.S. and South Korean militaries, which began on Aug. 21st but are still ongoing – so much for that!  “How the U.S. responds to this provocation will be closely watched by both Japan and South Korea, and could be a critical moment in alliance relations,” said Jenny Town, assistant director for the U.S.-Korea Institute at Johns Hopkins University’s School of Advanced International Studies. ?Given the administration’s strong response to the earlier threat against Guam, she said, “a tepid response now to this missile test further erodes U.S. credibility with our allies.” There is nothing more terrifying than a power-mad authoritarian ruler with a bloated ego that has to constantly be stroked by his sycophantic followers who have to primp up even his smallest accomplishments to keep him in a good mood, to prevent him goes off the rails and doing something even crazier than usual.   A "leader" like that thinks nothing of lying to his own people, restricting freedom of the press and blaming all of his administration's troubles on scapegoats – firing (or murdering) staff members whenever something goes wrong for them.  Imagine having to live under