The Communist Party leader arrived by plane in Hubei's capital for an "inspection of the epidemic prevention and control work" in the region, according to the official Xinhua news agency.  China's most powerful leader since Mao Zedong is usually a daily fixture in state media but has stayed out of the spotlight for much of the crisis and assigned Premier Li Keqiang to oversee the response to the epidemic – a move copied by Trump, who put VP Pence in charge of US efforts.

China reported only 19 new cases on Tuesday, the lowest figure since it started publishing data on January 21 but there are those calling that data into question amid allegations there is a cover-up aimed at getting Chinese workers, especially farmers, back to work at the beginning of the crucial planting season – regardless of how safe it actually is. 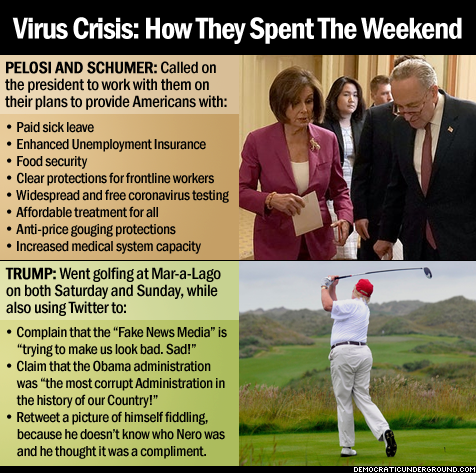 President Trump stayed safe on the golf course yesterday but made it back in the evening to announce he will seek further tax cuts (duh!) and "very substantial relief" for his friends industries that have gained his favor been hit by the virus.  As usual with Trump, rather than actually having a plan to announce – he was only promoting his next show with a teaser: "I will be here tomorrow afternoon to let you know about some of the economic steps, which will be major.” said our cartoon President.

Trump's press conference to announce a press conference tanked the Futures but then President Xi helped boost the markets later in the evening and, at the moment (8am) the Dow Futures are up 1,000 points, which is 4%, which is exactly what a weak bounce should be after a 20% drop according to our 5% Rule™ so let's not get too excited just yet…

We adjusted our hedges (as planned) but, otherwise, stayed pretty much on the sidelines in yesterday's carnage and will likely do the same today as