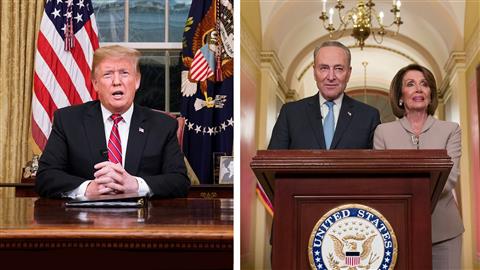 Mommy and Daddy had to put up a unifed front last night and tried to explain to Donald, using very small words, why he couldn't have a great big wall to play with.  The wall would be "expensive and ineffective" Pelosi said.  “Democrats and the president both want stronger border security. However, we sharply disagree with the president about the most effective way to do it,” said Schumer.  Donald also said the Santa Mexicans were going to pay for his wall and that turned out not to be true and Mommy and Daddy said we simply can't afford a $30Bn wall this year ($5.7Bn is just the downpayment to get started).

Not only that but, once you get the wall home, it's expensive to keep as you need 2,500 miles worth of guards and then there's the repair bills – which we don't pay on the other infrastructure we already bought.  It's like when you let a kid take care of a goldfish before trusting him with a puppy and President Trump has given us a very dead goldfish as far as infrastructure goes and now, rather than repair roads, bridges, damns or power-lines, Trump wants a new wall to play with but, as responsible parents, we already know it's only going to end up neglected like all his other toys.

Of course, Trump's temper tantrum which is ruining the lives of 830,000 Federal Workers and the Millions of Americans who depend on their services, is not just about the wall.  “This president just used the backdrop of the Oval Office to manufacture a crisis, stoke fear, and divert attention from the turmoil in his administration,” Schumer said.  Democrats have urged President Trump and Congressional Republicans to support legislation that would reopen the government while they continue the debate over border security.  “President Trump must stop holding the American people hostage, must stop manufacturing a crisis, and must reopen the government,” Speaker Pelosi said.

This was the first speech of Trump's Presidency from the Oval Office and, though it started out sort of Presidential, it quickly veered back to the usual fearmongering and completely made-up…
END_OF_DOCUMENT_TOKEN_TO_BE_REPLACED