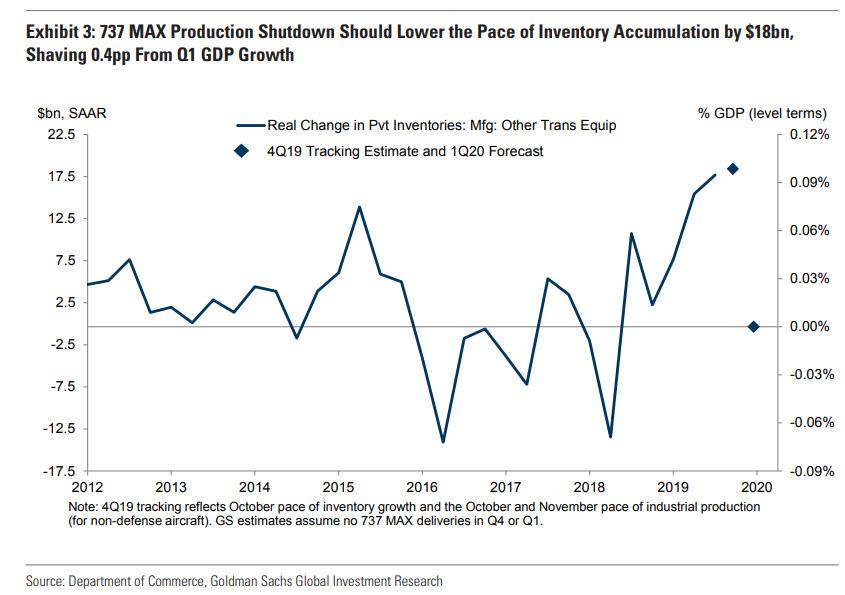 Boeing (BA) Sells $25Bn worth of airplanes per quarter and spends about $20Bn to make them so that's 0.1% off the $4.7Tn quarterly GDP right there but their suppliers also spend money and we're not even considering the impact of the layoffs and the hit we're going to get to inventories – which is also a negative on GDP.  Goldman Sachs (GS) estimates that an $18Bn reduction in inventory (not all BA planes are the Max) alone will knock 0.4% off Q1 GDP PLUS a good 0.1% from BA's lack of revenues (along with the chain of suppliers) so we're talking about a 0.5% reduction to a GDP number that was already projected to be barely above 1%.

Durable Goods and Manufacturing numbers will also take a huge hit so we're looking ahead to a string of bad reports – maybe even a bump in unemployment in the months ahead.  We are constantly amazed by how shocked traders seem to be by news that we could see coming a mile away so I will tell you now – while it is still a mile away – to prepare yourself for the shock of your fellow traders – who are ignoring this coming storm just like they've ignored all other storms to hit the market in the past year.

Still, this is math and MATH is telling us that the Q1 GDP will be about 33% lower than the currently projected 1.5%, which means that no one seems to be taking into account the ACTUAL decision by Boeing to halt production through Q1.  Nothing is going to change that – once they shut production,…
END_OF_DOCUMENT_TOKEN_TO_BE_REPLACED