What will it take?

Yesterday the Trump Administration announced that they will be seeking the ELIMINATION of Payroll Taxes for the rest of the year.  The Government collects $1.26 TRILLION in payroll taxes so this is a $630Bn bonus for working Americans (the other $630Bn goes to the companies that pay matching funds) and, for Trump, this is his fairest tax cut yet, with only half the money going to corporations and rich people who don't need it - instead of the usual 90-100%.

Aside from the fact that this is yet another thinly-disguised tax break for corporations, NOT collecting $1.2Tn will push our annual deficit close to $2.5Tn – that's adding more than 10% in a single year!  This is in reaction to a virus that, so far, has infected 1,039 Americans – we could just give each person who's infected $1.2Bn – that would make them feel better!

The Bank of England did an emergency rate cut this morning and India, South Korea and Malaysia are also considering cutting rates and our own Fed has a meeting next week along with Japan, Indonesia and the Philippines followed by Thailand and New Zealand at the end of the month.  Thailand, Japan and China have already made stimulus moves and we're waiting on the ECB and Bank of Canada as well.  MORE FREE MONEY FOR EVERYONE!!! 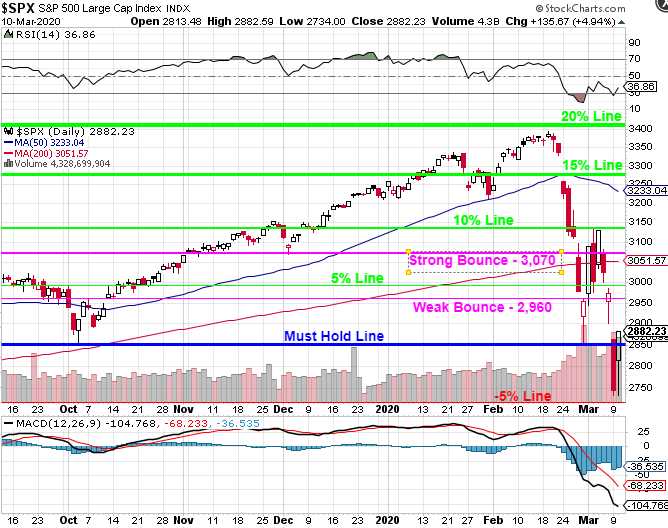 Yet the markets are not doing better at all.  Despite yesterday's impressive "rally", we remained firmly on the sidelines as we never even came close to our "Weak Bounce" line at 2,960 and that's not even a recovery until we cross back over the "Strong Bounce" line at 3,070 and hold that for 2 consecutive days.

Failing to get back to the weak bounce line in the amount of time it took to fall below it (2 days) means you can kiss a V-shaped recovery goodbye and failing to make a weak bounce in the time it took you to fall from the top (2 weaks) means you are just consolidating for a move down – so that's what we're paying attention to at the moment.

With all this stimulus talk being bandied about, however, I did put out an Alert to our Members this morning to be on the look…
END_OF_DOCUMENT_TOKEN_TO_BE_REPLACED