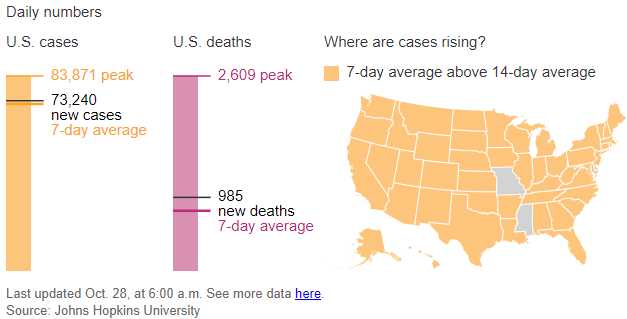 Down we go again as US cases hang around their record highs and Europe is starting to catch up as another wave of the virus goes global.   No country, of course, can match the US in number of cases or number of deaths because we are truly the most incompetent Government on the planet.  Of 50 US states, only 2 (Mississippi and Mossouri) do not have rising numbers of viral cases – only 2.

The does not, of course, stop Donald Trump's White House from announcing that it has "successfully ended the COVID-19 pandemic" on the same day that 73,240 Americans came down with the disease.

“We have exploding case counts. Death rates will undoubtedly rise. They are living in a parallel universe that bears no relation to the reality that Americans are living,” said Dr. Tom Frieden, former director of the Centers for Disease Control in the Obama administration. “And this idea that we should let it spread and protect the vulnerable is a really dangerous mistake. The idea that it [containing the virus] can’t be done ignores reality.”

Do you see where it says "National Emergency Declared"?  That was 7 months ago when the US had less than 2,000 cases and now, on October 27th, with 8,779,839 American infected (73,240 in a single day), the White House has declared the National Emergency is over, not because it's actually over, but because it's a week before the election and Donald Trump likes to claim he defeated the Coronavirus at his rallies and now he can say "it's official".

1,000 Americans per day are dying.  3,393 Americans have died from Terrorist attacks yet 1,000 people, EVERY DAY, are being killed by Trump's virus and he's declaring "Mission Accomplished".  20 years later, we still have to scan our bags and take off our shoes at the airport and even the incompetent George Bush II formed the entire Department of Homeland Security in response to 9/11 and the TSA was formed on November 19th, 2001, 5 weeks after the attack on the World Trade Center.

Why?  To prevent more American deaths.  To help Americans return to their normal lives…
END_OF_DOCUMENT_TOKEN_TO_BE_REPLACED