Now Trump is "considering" Huawei-like sanctions on Hikvision (a $37Bn company) and Zhejiang Dahua Technologies, sending both companies limit-down 10% this morning, even though the US is only 5% of Hikvision's sales.  Other companies are supposedly on Trump's "list" but they have not been disclosed.

Meanwhile, yesterday, China's President Xi toured a rare-earths manufacturer, likely to point out that China actually has us by the balls as they supply 90% of the rare materials that make electronic manufacturing possible.

On his tour, President Xi was shown on state television on Monday accompanied by his emissary to the trade talks with the U.S., Liu He. Stock prices of companies associated with the industry soared in China in anticipation of a potential increase in prices of the materials.  Beijing exerts critical influence on the supply of rare-earth materials. The 17 elements have high-tech uses: neodymium for permanent magnets in mobile phones, terbium in LED lights and dysprosium used to cool nuclear rods, for example. Though the minerals are found in abundance in many parts of the world, processing them into materials is often highly polluting, sometimes releasing radioactivity. China holds that production chain. 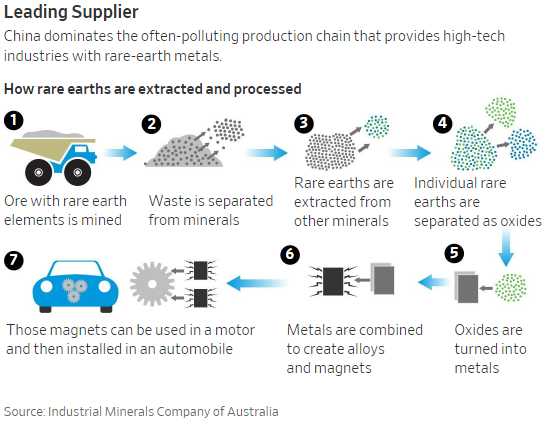 This whole thing could be part of a brilliant plan by Trump to manipulate the situation to allow him to lift the environmental restrictions on rare-earth mining in the US. and Texas Mineral Resources Corp. (TMRC) is one company that would greatly benefit from such a decision.  I don't usually play penny stocks, but this one could be fun at 0.27, as they would certainly be in the right place at the right time if Trump can play the "national security" card (again) to allow TMRC and others to begin strip-mining America.  That's certainly worth a few board seats for the Trump family down the road, right? We already began the day shorting the Dow in our Live Member Chat Room, my note to our Members at 7:06 am was: