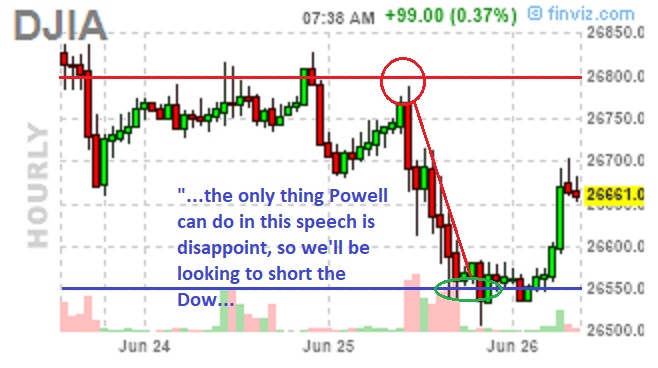 Wheeee, what a ride!

As we expected, Powell's speech yesterday was a disappointment and the Dow fell 200 points during Tuesday's session and you can see why we're using the DXD ETF as one of our primary hedges.  We stayed down overnight but, early this morning (about 5am) Steve Mnuchin jumped on CNBC at midnight in Bharain to tell Hadley Gamble that the US and China were "90% of the way there" on the path to a trade deal.

This is, of course, meaningless nonsense as we're the same 90% of the way there as we were when trade negotiations broke down a few months ago so Mnuchin is simply tearing a page out of Chamberlian's book to declare "Peace in our Time" to score points at home, no matter how untrue the facts of the matter are.  Still the market responds like Pavlov's dogs EVERY time someone in the administration says we are making progress on trade, and this morning was no different with the Dow Futures (/YM) popping over 100 points (0.4%) on the "news", we get a rally.

We had the same "good news" at the last G20 meeting in December, when the headlines were: "Donald Trump and Xi Jinping declare trade truce at G20" yet here we are, 7 months later with even more tariffs and even less progress.  We were 100% then, we're 90% now – what exactly is the market celebrating?

Certainly it wasn't the Data as we had TERRIBLE numbers from the Richmond Fed, New Home Sales missed by 10% and Consumer Confidence dove 10% in Expectations and 8.3% overall.  Consumer Confidence is now at a 2-year low while Economorons predicted it would be higher – which shows you how clueless the people making pronouncements on this economy truly are! 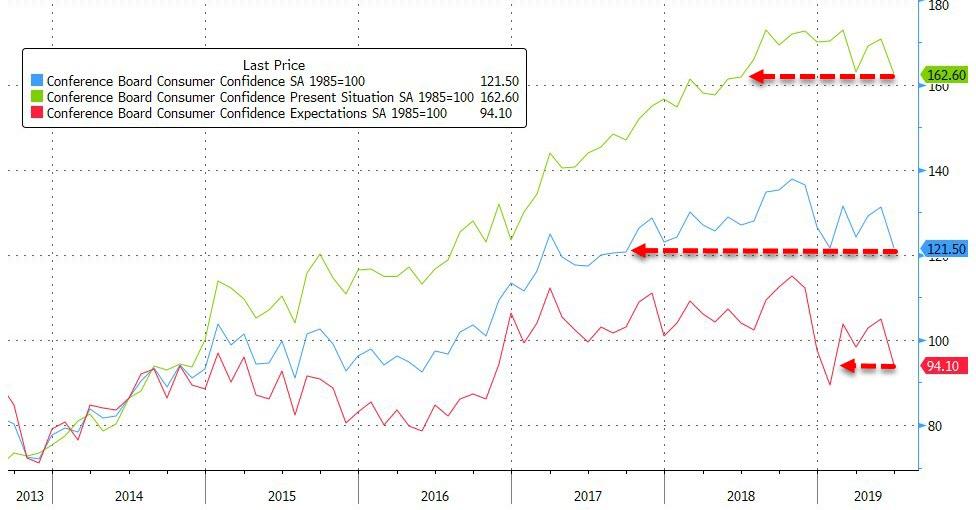 As you can see from the chart, forward expectations (red) re now lower than they were when Trump took office in January of 2017.  If we see the other segments move lower to join them, then we really have to question: