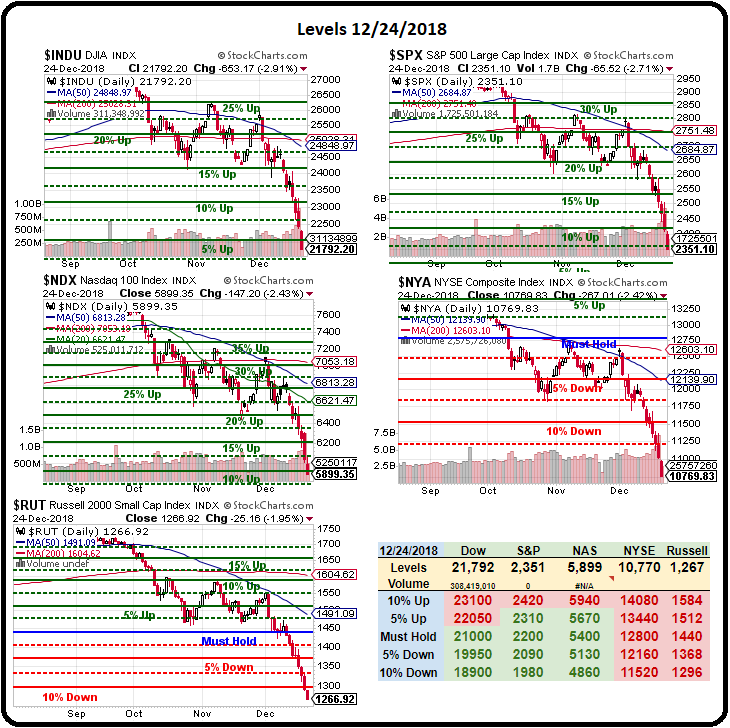 Now that is one UGLY quarter!

As you can see from the small image of the Big Chart (click to enlarge) the marekts have been in free-fall for the month of December with the indexes giving up about 20% of their gains (not 20% from the top) in just over 20 days with almost no up days the whole month.

This Government shut-down is different and the conservative, Financial News Media as well as many of the Top 1%-owned Media Outlets tend to ignore the fact that the previous shut-downs (1995 Newt Gingrich, 2013 Obmacare and 2018 Dreamer) were acts by the opposing party house against the President so there was confidence that our LEADER would work to resolve the temper-tantrum the House leaders were having.

This time is different as it's our "leader" having a temper-tantrum and his party controls both the House and the Senate so how are people going to be confident that this will be resolved when you have an incoming Democratic House in just two more weeks?  400,000 Government employees are already out of work and millions of contractors aren't going to get paid and projects won't get done and things won't get ordered…  The US Government is the largest part of the US economy, spending over $4Tn a year, call it $350Bn/month and that's money the economy can't actually live without – 20% of our entire GDP is Government Spending.

Each month the Government is closed knocks 2% off our GDP and the slowing economy will contract wages and Corporate Profits and, guess what?  That will make the deficit explode as it lowers the rate of tax collections.  That's why the market had such a harsh reaction to this shut-down but it's still been an over-reaction nonetheless and we are certainly now looking for at least a weak-bounce correction, which would be a 4% gain on the indexes from these levels.  Let's call it from the 20% correction lines:

Shutdown Friday – Government Closes for Christmas Follow-Through Thursday – After a Record Day, A Pause or More of the Same...
Scroll to top