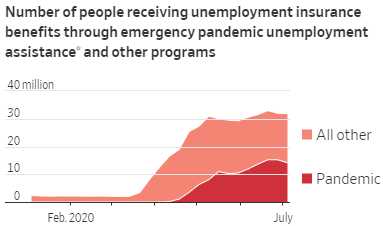 Will the Fed save us (again?).

Looking at the chart on the right, clearly we are in need of saving.  Those numbers are pretty up-to-date and we're starting to re-close in certain places and several airlines and auto makers have announce massive job cuts that are not going to make things better.  At least this chart will LOOK better as people will no longer be getting the benefits, which run out soon – so they will no longer be counted on this chart – having moved over to the "homeless" chart or the "impoverished" chart.

30M unemployed is 1/10 of our fellow Americans and you know how many more businesses are struggling in your neighborhood.  Is it another 1/10th?  Will 20% of our people be out of work soon?  What happens to the economy if 20% less people are getting paychecks?  Clearly the Government, even if the Liberals take charge, will need 20% more money to prop it up and we've already spent $6.7Tn in the past 4 months just to get to this mess! Obviously the money was mainly misdirected and wasted but is that going to change when we give Jared another $500Bn of untraceable funds to play with?  What happened to the first $500Bn?  Oh yeah, untraceable…  Well there was another $500Bn that the Treasury had and that fund was traceable but, at last count, no one was getting that money either.

Notice how the Federal Reserve Actions are not being counted as part of our debt and that's a good thing as we've added $2.5Tn in new debt already this year and Congress is voting on another $1-3Tn to get us through Q3 but even $6Tn is barely 1/3 of our GDP and we've certainly taken a 30% hit to the economy this year – we'll find out more in tomorrow's GDP report.