Do they really matter?  Like Willaim Barr, John Mitchell was Richard Nixon's Attorney General and, like Barr, Mitchell did whatever it took to keep his boss out of jail – making the cover-up worse than the crime and leading to the eventual impeachment of President Nixon, who resigned to avoid the disgrace of having what he did revealed to the American people.

Not only did that process take a long time but Nixon was re-elected during it.  The Watergate Break-In happened on Sept 3rd, 1971 and Nixon was re-elected in a landslide a year later and then there were years of cover-up and posturing before 7 of Nixon's co-conspirators, including his loyal Attoney General Mitchell, were indicted on March 4th, 1974 and it was still not until August when Nixon finally resigned, a full month after the House voted to impeach him.

That's about 3 years, the same 3 years Trump has had only the GOP has controlled the House and Senate until just this January so there hasn't been a proper investigation and the results of the Mueller Investigation have been buried (and redacted) so today is a very important day for the President and the AG.  One thing the President learned from Nixon is not to tape anything – Trump doesn't even let WH staff take mandated official records when he reports to Putin – that's smart.

So how are we going to nail this guy?  We probably won't but, unlike Nixon, the Democrats hope to at least make the case to the American people that Trump should not be given another 4 years and, if that works, they can set about undoing the damage Trump has already done in less than 3 years (so far).  This is likely to be an important and frustrating day in American History as nothing will really be accomplished today – but at least it will help draw the battle lines for 2020. 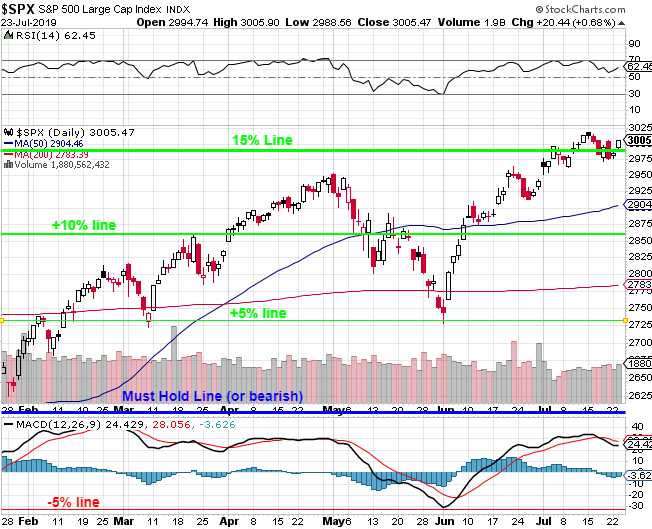 Market-wise, we're sitting right on that 3,000 line on the S&P this morning as the Futures have dropped overnight, giving up about half of yesterday's gains.  Mueller is testifying at 8:30 and…
END_OF_DOCUMENT_TOKEN_TO_BE_REPLACED