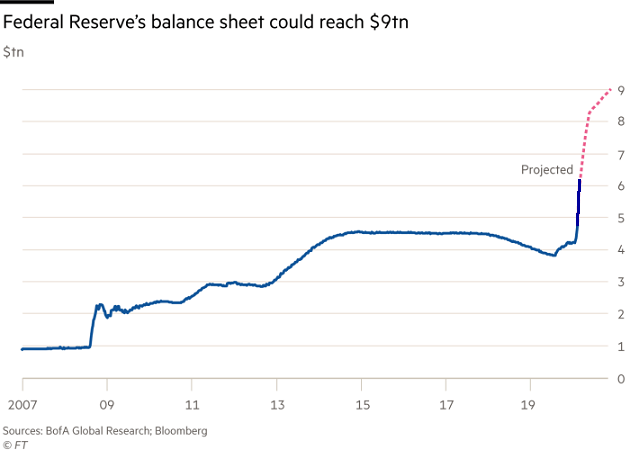 This is getting boring.  Every day the stock market goes up and up while we read about the Protests and the Riots and the Cold War with China and the Unemployment and the Virus and the Debt and the Economic Slowdown….  None of that matters on Wall Street because the World's Central Banks printed $20,000,000,000,000 of new money this year and almost all of that money went into the stock market.  So much so that the Fed now directly buys ETFs.

That's right, the Fed now buys junk bonds and the majority of these ETFs are managed by Blackrock (BLK), who also runs the Fed's debt-buying programs (once again, the Fed is NOT a Government Agency – it is a Banking Cartel made up of Bankers to protect the interests of Bankers).  Still, even for bankers, this seems a little fishy.

Buying Junk Bonds is a round-about way of giving CASH!!! to Corporations but in a way that the average American does not understand.  The companies issue bonds that normally would not get purchased at low interest rates but the Fed steps in and buys them all at the issue price so they are effectively giving the companies ($148Bn in Q1) loans far below the fair market value and ignoring the risks involved.  Since the only people that can be hurt by this are the taxpayers – why the F not?

That $148Bn will be dwarfed by the Q2 lending, which is still underway and you can see what a party this is for Blackrock, whose stock jumped 20% on massive volume as the Fed started buying everything they had to sell.  This is simply a long-term game-changer for BLK and other Junk Peddlers – ALL bonds get sold – no one goes Bankrupt. …
END_OF_DOCUMENT_TOKEN_TO_BE_REPLACED