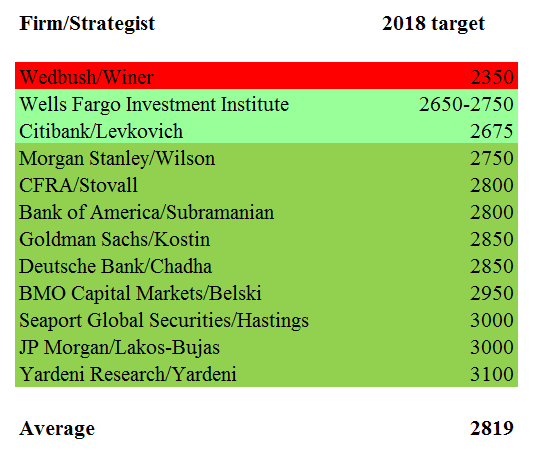 That's where the S&P 500 topped out in both 1999 and in 2007 – in both cases right before crashing and giving up 50% of that level.  That didn't stop analysts from calling for higher highs or assuring us that the markets were still a buy – even as they were collapsing.  That's because the analysts and the TV stations don't work for you – they work for their sponsors and their sponsors are the investment banks and brokers that make their money off your transactions – they will never tell you to go to CASH!!! – they want you to BUYBUYBUY all the time.

Only one of 12 "equity strategists" polled by Marketwatch can imagine the market goes lower in 2018 and, frankly, I'm not one of them either as I think we do end up around 3,000 by the end of the year.  I'm simply expecting a correction first.  IF the market keeps going into August, it will become the longest bull rally in history at 9 years – 8 of them under Obama and 1 of them under the guy who claims all the credit for it.  Bush Jr took credit for the Clinton rally too – that didn't turn out well for him or America.

We went to CASH!!! two weeks ago because we think the market is currently being held up simply because no one wants to sell and take a profit in 2017, when the taxes paid on those gains will be substantially higher than they will be next year.  In fact, you can see from Morgan Stanley's chart that tracks Intra-Year Declines in the market, that this year has been a real outlier and there may be a lot of pent-up demand for selling that will be unleashed in 2018. 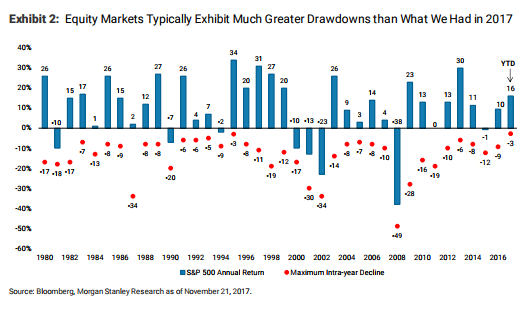 Or maybe not.  That's why we're in CASH!!! – the market is too scary to stay in but also way too scary to bet against – so we're sitting it out and waiting for the dust to settle.  There are still plenty of things to buy.  We reviewed our Top Trades yesterday and found several stocks we'd love to add to our new portfolios in 2018 already.  Still, it's slim…
END_OF_DOCUMENT_TOKEN_TO_BE_REPLACED