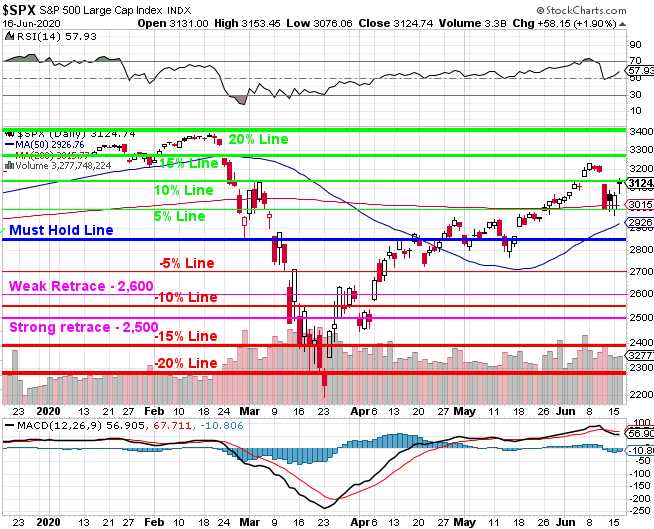 We blasted back to the 10% line at 3,135 yesterday but failed to hold it and we'll try again this morning in a very forgiving Futures market as the Fed's Powell made enough good noises yesterday about the Fed's Infinite Balance sheet that the bulls don't think there's much to worry about.

As I've mentioned, I live in Florida and over 2,700 people came down with the virus yesterday in one of the most open states in the Nation and 7.5% of the people are now testing positive for the virus but, keep in mind, that's a bit skewed towards people who think they have the virus anyway.

Just to the south of us, 34,918 people caught the virus yesterday in Brazil, about 1/4 of the 139,479 people who caught the virus around the World – one of the worst days on record.  In the New York Times this morning, Thomas Friedman, who has 3 Pulitzer Prizes, asks: "Is Trump Trying to Spread Covid-19?" and he makes a good point.  The President literally would seem to need a panel of experts who are advising him to do the WORST possible thing to contain the virus every day.  Literally NOTHING would be better than what this Administration is doing to the American people.

We are miles past Vietnam (70,000) in American lives lost to Trump's incompetence and we're heading towards World War II's 405,000 American deaths and, after that, only the Civil War (620,000 casualties) would be able to top the disaster we are facing now in this country.  We'll see what the President has to say about this on Saturday, when he holds an indoor rally for 20,000 people in Tulsa, OK – an event some are predicting will become a "Super-Spreader" as people are coming from all over the country to gather and infect each other so they can take it back to their home towns.  BRILLIANT!

Tulsa County already had 89 new cases on Monday, the most ever, with active cases climbing from 188 to 532 in the past week as the county re-opens in preparation for the rally.  Keep in mind, those are just the cases they know about – there could be thousands of locals at the rally…
END_OF_DOCUMENT_TOKEN_TO_BE_REPLACED

Testy Tuesday – Back to the 10% Line on S&P 500 Thrilling Thursday – Bolton Claims Trump Asked China to Help Him Get Re-E...
Scroll to top