Iran fired missiles into Iraq last night and attacked US bases and the Dow fell 500 points and the S&P fell 60 points but they didn't kill anyone and, even stranger, Iran then indicated that that was their retaliation and they were satisfied and Trump seemed to feel that was fair as well and now the war seems to be over and the markets are right back to where we started yesterday morning.

Iran says it does not seek war after firing missiles at bases housing Americans. 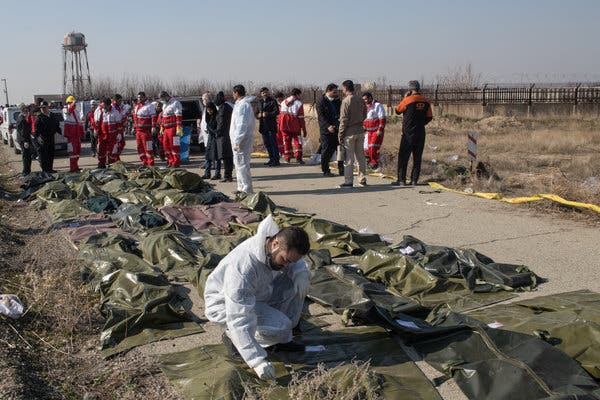 That's kind of crazy, but crazy is pretty normal these days so we'll just have to go with the flow and see what happens, I suppose.  In an unfortunate coincidence last night, a Boeing (BA) 737-800 (not Max) crashed shortly after taking off from Tehran, killing all 170 passengers.  Supposedly it was "technical problems" and that's got BA stock down 2% this morning – the day after it was announced that Warren Buffett was building a stake in the airline.

Ukraine International Airlines, is partly owned through a network of offshore companies by Ihor Kolomoisky, an oligarch with close ties to President Volodymyr Zelensky, so of course there are rumors that this all ties back to Trump sending a warning to Zelensky to keep his mouth shut but hat would seem a bit much, even for Trump, though it is a crazy coincidence that outside inspectors won't be welcome due to the weekend war (that seems to be over) so "technical issues" it is and we'll all move on and accept it, right?

All this peace breaking out has sent Oil (/RB) plunging back down to $62 from $65.65 yesterday morning and Gasoline (/RB) fell from $1.80 back to $1.70 as the President declares all is well and has, so far, failed to mention the plane crash – so it will be interesting to hear what he has to say this morning.

The markets don't need to wait, apparently, as it looks like we'll be up at…
END_OF_DOCUMENT_TOKEN_TO_BE_REPLACED