Lines in the sand.

We did pick up a couple of longs yesterday, in our Live Member Chat Room as we caught CitiGroup (C) down at $65 and Royal Caribbean (RCL) at $105 – so we sent out a Top Trade Alert with bullish plays on both of them.   We have to be careful with banks as European and Asian Banks are off a cliff and the fact that it's being ignored in the US reminds me very much of 2007 – when we acted as if nothing that happened in Europe or Asia would affect us.  Here's a list of 16 of the 39 Global Sifis (Systemically important Global Banks) that are already down 20%: 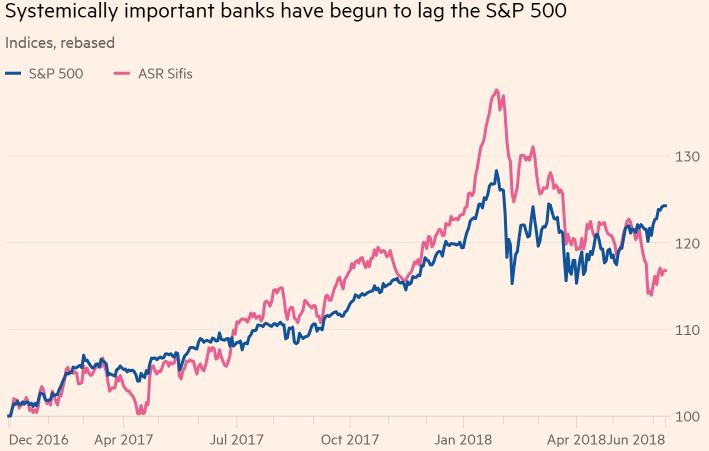 According to the Financial Times, the synchronised dips were a sign of global financial stress.  Ian Harnett, the managing director of global strategy at Absolute Strategy Research in London, used the data this week to send out his first “Black Swan” alert since 2009.  The alert he put out on Monday was his first since a warning on inflationary risks in June 2009, as oil prices climbed higher. Mr Harnett drew parallels to another bearish note he wrote in March 2007, when European banks began to sink while non-banks marched higher.

We'll keep an eye on that into the holiday weekend but, on the bright side, Trump has already folded on his tough talk on China and is now falling back on our existing restrictions placed by Congress' Committee on Foreign Investment in the United States, or Cfius, which reviews investments for security threats.  “We have the great scientists, we have the great brains,” …
END_OF_DOCUMENT_TOKEN_TO_BE_REPLACED