Usually, we don't care so much about Europe.

Brexit, of course, remains the big story over in Europe but Italy is also falling apart and, just this morning, the Parlimentary Budget Office said the Government's forecast of 1.5% growth next year was exaggerated, indicating deficits will be larger than projected and far afoul of EU regulations.  Italy's debt is already 130% of GDP and that's considered a crisis – said the writer in a country who's debt is 110% of their GDP and also has BS inflated Government projections for economic growth. 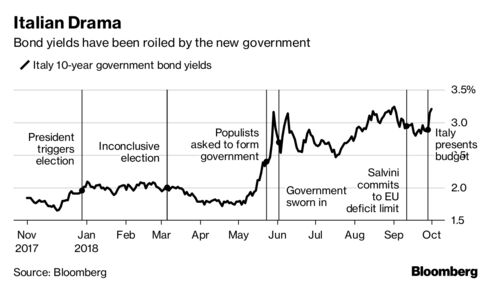 EU authorities are expected to declare Italy in violation of the bloc’s rules on fiscal discipline unless Rome changes course. Leaders of the League and 5 Star have defiantly denounced EU officials, raising the specter of a monthslong confrontation.  Last Friday, the EU’s executive arm criticized Italy’s budget plans, saying they represent a “significant deviation” from recommended fiscal policies.  Skeptical investors have dumped Italian bonds and stocks, especially banking-sector shares. The yield on Italy’s benchmark 10-year bonds touched a four-year high of 3.7% on Tuesday.

3.7% is off the chart and that chart is up over 100% since May!  By comparison, Germany is still borrowing money at 0.55%.  Italian Finance Minister Giovanni Tria said the government is worried by the “unacceptable” bond yield spread, which on Tuesday was near the widest in more than five years.  "If the spread reaches 500?” Tria said in response to a hypothetical question. “The government will do what it does in an unexpected crisis, because we aren’t expecting that.”  That's not actually reassuring since Italy in the 70s and 80s massively devalued their currency and engaged in hyperinflation to pay off debts (ie. pay debts with worthless currency to pretend they aren't…
END_OF_DOCUMENT_TOKEN_TO_BE_REPLACED

Tumblin’ Tuesday – Dollar Up, TBills Down, Markets Look for a Bottom $5,000 Thursday – Cashing in Our Shorts and Looking for the Bounce Lines
Scroll to top