That's the price of S&P 3,700 as the Trump Administration proposed just under $1Tn in additional stimulus including another $600 per person in direct checks.  The new stimulus does not include $300/week unemployment compensation and that's still a big sticking point with the Democrats.  Crafting a liability shield for businesses, schools and health-care providers facing coronavirus-related lawsuits has been a priority for Republicans throughout the negotiations, while Democrats have pushed to send more aid to state and local governments. 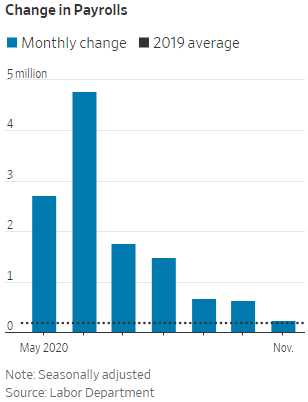 Along with state and local aid, the $908 billion bi-partisan framework at the center of the current negotiations would add $300 to weekly unemployment benefits, provide $82Bn for schools, $16Bn for the distribution of Covid-19 vaccines and $288Bn in relief for small businesses.  Both the White House and some lawmakers are making a late push to include the new round of direct payments in the next bill. One of the most popular parts of stimulus legislation Congress passed in March, the last round of direct payments sent $1,200 per adult and $500 per child to many American households, at a cost of nearly $300Bn.

Clearly we need the stimulus.  We are still 10M jobs down from where we were in February and job growth has ground to a halt and the virus is raging out of control with 215,000 new infections yesterday as we now top 15M cases in the US, adding more new cases every day than the country had TOTAL at the beginning of April.  More cases every week (2M) than we had TOTAL at the beginning of June and more cases for the month of December (8M) than we had TOTAL through the middle of October.

That is how fast this problem is accelerating and Mitch McConnel and the GOP have been blocking additional virus relief for over a month now playing games to time it so they can look like the good guys just ahead of the Georgia Senate elections, where voting begins next week to decide if we're going to keep McConnel as the Senate Majority leader to plague Biden the way he has been a literal plague on this Nation.

Here's a chart of the 10 WORST countries on…
END_OF_DOCUMENT_TOKEN_TO_BE_REPLACED

Trade of the Year Tuesday – Who Will Survive the Fall? 3,054 Thursday – US Hits Record-High Deaths, Europe Increases Stimulus
Scroll to top