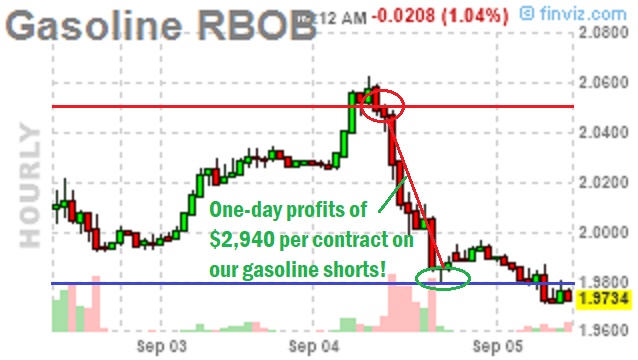 Wheee – this is fun!

Congratulations to those of you lucky enough to get the PSW Report yesterday, where we told you about our Gasoline (/RB) Futures Shorts at $2.05 as we plunged all the way to $1.98, which was good for 0.07 per contract and, while 7 cents may not sound like much, it was actually a huge one-day move and, at $420 per penny, per contract, it was good for profits of $2,940 for each contract – what a great way to start the month!

“From here, we’re expecting RBOB to go down to between $1.80 and $1.85 over the next month and stabilize there…There’ll be the traditional pre-Thanksgiving run up, where it could get a little higher, and we’ll be shorting it again at that time.”